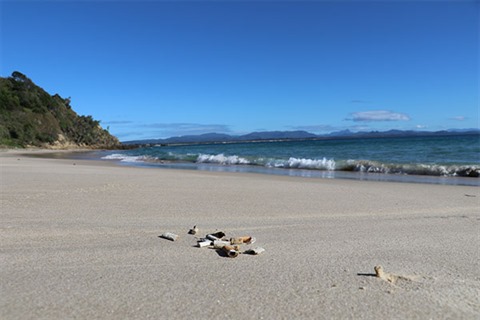 As part of their ongoing ‘Butt Free Byron Shire’ campaign, Byron Shire Council continues its blitz against littering on their beaches and foreshore areas.

Fines of up to $250 will be issued to offenders caught littering or smoking on the beaches in a bid to cut down cigarette butt and all litter.

During patrols, Council rangers will be educating the public on the importance of correct waste disposal and the impacts of litter on the community and environment.

Council’s Waste Education and Compliance Officer, Zoe White notes “both littering and smoking on Byron’s beaches is illegal and our strong message to the community and to our visitors is that it will not be tolerated.

“We know that litter can have detrimental effects on local wildlife, especially marine life as items such as cigarette butts and plastic can take several years to break down in the marine environment and be easily ingested.

“So the message is simple – put all your rubbish in the bin, especially cigarette butts that account for 82% of our litter in the shire and are harmful to the environment.

“We have even installed special butt bins around the Shire. The butts are safely secured and can even be recycled into new products!”

Council are asking people to help keep the shire clean and protect community and environment by following these simple steps and spreading the message:

Council’s ‘litter enforcement blitz’ on Byron’s beaches and foreshore areas is on until mid-March as a part of the ongoing Butt Free Byron Shire campaign, thanks to funding from the NSW Environment Protection Authority (EPA).