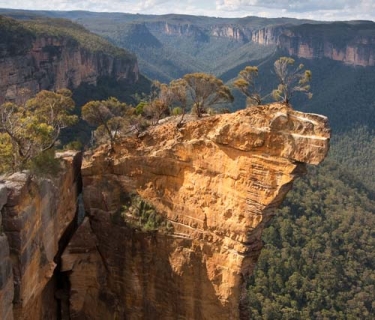 The Botanists Way Discovery Centre at the Blue Mountains Botanic Garden, Mount Tomah is set to become a ‘must see’ for local, interstate and international visitors.

The new Blue Mountains attraction, which aims to revitalise one of NSW’s top three most popular regional tourism spots, encapsulates the awe-inspiring feat of early botanists who scaled the Blue Mountains by foot with limited supplies to discover new plants.

Opening the new attraction, NSW Tourism and Special Events Minister, Stuart Ayres stated “at the Centre, you drink in the expansive view and sheer beauty of the UNESCO World Heritage Listed Greater Blue Mountains and ponder the will of the early botanists who explored it.

“You learn how in the early 1800s, the Joseph Banks appointed botanist George Caley explored the northern Blue Mountains to seek rare plants as he tried to find a crossing to the west.

“Not only was Caley the first white man to cross the largely impenetrable expanse of the Grose Valley with the help of Aboriginal guides, he discovered 30 new plants and was the first botanist to seriously study the eucalypts.

“The gum tree, an integral part of this nation’s identity, is prevalent in the Greater Blue Mountains where 13% of the world’s eucalypts grow – and one of the reasons why the area is World Heritage Listed.” 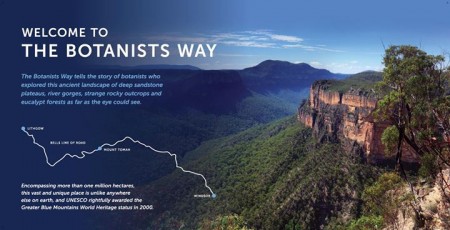 Minister Ayres said visitors of all ages to the Centre will be fascinated to learn how George Caley and others like him paved the way for later conservationists such as Myles Dunphy, who worked tirelessly to ensure the environment was preserved.

He added “three national parks were created during Dunphy’s lifetime and, in the year 2000, one million hectares of the Greater Blue Mountains were inscribed on the World Heritage List.

“The region boasts 127 plants of conservation significance - some of the species such as the Wollemi pine and dwarf Blue Mountains pine have remained virtually unchanged in appearance for many millions of years and have connections with Australia’s distant past, when it was part of the larger landmass called Gondwana.”

The NSW Government has committed $38 million in the Revitalising Sydney's National Parks Program - a four-year program which aims to revitalise key visitor destinations including the Blue Mountains.

After receiving $50,000 funding from a Destination NSW regional tourism grant which was matched by the Royal Botanic Gardens and Domain Trust, the new Botanists Way Discovery Centre was developed to revitalise the World Heritage Exhibition Centre.

Kim Ellis, Executive Director of the Botanic Gardens and Centennial Parklands said the exciting new Botanists Way Discovery Centre puts the emphasis back on botany and the area’s rich heritage.

Guests at the opening also had the opportunity for a private view of Dr Shane Smither’s exhibition ‘This is Darug Art’. Dr Smithers made the traditional Darug tools on display. His exhibition presents a collection of paintings and artefacts that bring to life the ancient stories, style and symbols of the Darug people.