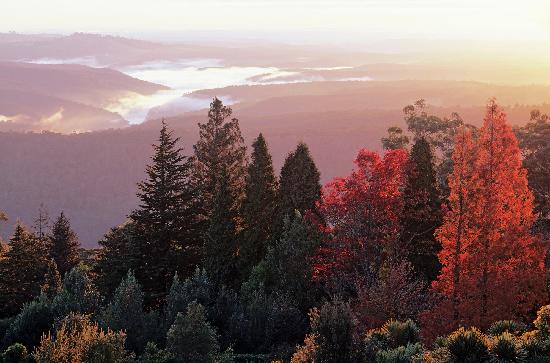 The new World Heritage Exhibition Centre has been opened at the Mount Tomah Botanic Garden in the NSW Blue Mountains.

The Centre was opened by veteran actor and passionate environmentalist Jack Thompson along with retiring Member for Macquarie Bob Debus MP, Debus explaining that "I encourage people to visit this spectacular Centre at Mount Tomah Botanic Garden.

"This Exhibition Centre is a superb showcase of the Greater Blue Mountains Area and celebrates the 10th anniversary of the Areaâs inscription on the UNESCO World Heritage List in 2000 for its outstanding universal values. Importantly, it will also be used to deliver curriculum based lessons to school children relating to National Parks and conservation."

Jack Thompson said the spell-binding views as well as an intellectual and artistic experience help deliver a strong conservation message, stating âthe first seed of conservation was planted by Aboriginals who took great care of this natural wonderland. Later European settlers made their mark when

"The Blue Gum Forest Committee saved the Blue Gum Forest in the Grose Valley from being developed by a leaseholder into a walnut farm. Despite the depression they raised enough money to buy the lease and then gave the forest back to the public. Their success became a symbol for future community environmental campaigns."

Dr Entwisle stated "the awe inspiring vista from the Centre will transport visitors into another realm, where the areaâs history, culture, geography, animals and of course its flora rule."

Mount Tomah Director Rob Smith added âthis beautiful and sustainable new building provides a space where kids from four to 94 can play in a virtual world of canyons, touch diverse forms of gum trees, wander through a slot canyon without getting their feet wet, and in a full surround sound theatre experience a journey through the gigantic cliffs of the 1,000,000 hectares of wilderness and National Park landscapes that make up the Greater Blue Mountains World Heritage Area.

"The Centre gives the botanic garden visitor a 21st Century journey through these ancient landscapes as the world class Mount Tomah Botanic Garden becomes a gateway for the surrounding seven National Parks and the Jenolan Caves Karst Conservation Reserve that make up the Greater Blue Mountains World Heritage Area."