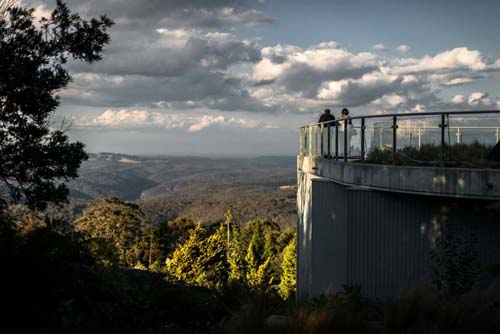 The Greater Blue Mountains World Heritage Centre, located at the Blue Mountains Botanic Garden Mount Tomah, is set to benefit from a $100,000 upgrade.

The Exhibition Centre was successful in receiving a grant of $50,000 from the NSW Government’s Regional Visitor Economy Fund which will be matched by the Royal Botanic Gardens and Domain Trust. The funding will be used to improve the visitor experience and to increase visitation to the Exhibition Centre.

The Exhibition Centre opened in 2010 with the aim of providing information on, and communicating the values of, the Greater Blue Mountains World Heritage Area. It provides interpretation on the Greater Blue Mountains World Heritage Area to encourage respect for and protection of this special environment. The original project was a partnership between the Royal Botanic Gardens and Domain Trust and NSW National Parks and Wildlife Service.

A plan for the upgrade was provided by Arterial Design and Production Consultancy. The plan focusses on interpreting the northern Blue Mountains, the route known as the Botanists Way as it was first crossed by botanist George Caley, and on showcasing the world class canyons in the area, such as nearby Claustral Canyon, within the context of the Greater Blue Mountains World Heritage Area. The upgrade is expected to be completed by 2015.

Commenting on the upgrade, Sydney Parklands and Botanic Gardens Executive Director Kim Ellis explained “the Blue Mountains Botanic Garden is ideally placed to raise awareness of the significance of the Greater Blue Mountains World Heritage Area to domestic and international visitors, being located on one of the two main routes to the Blue Mountains and being a major tourist attraction in the region.”

The Greater Blue Mountains World Heritage Area covers 1.03 million hectares and includes seven national parks and outstanding examples of ecological processes, natural habitats and cultural associations. It is home to primitive species with Gondwanan affinities, including the Wollemi pine, and is a centre of the diversification of eucalypts.

The Blue Mountains Botanic Garden is the cool climate Garden of the Royal Botanic Gardens and Domain Trust. It is the highlight of the Botanists Way drive, the historic crossing through the dramatic northern Blue Mountains World Heritage wilderness, and is situated 1,000 metres above sea level at Mount Tomah, less than two hours drive from Sydney. The beautiful landscaped gardens, with spectacular views, are arranged geographically to showcase cool climate plants from around the world. The Garden is the largest tourist attraction in this area attracting around 160,000 visitors annually.