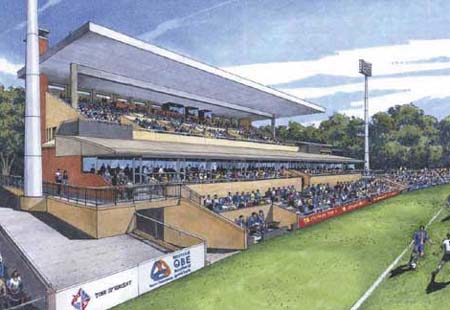 The Western Australian Government has awarded BGC Construction with the contract to redevelop the nib Stadium.

The redevelopment will see the eastern, northern and southern sections, and all temporary sections, of nib Stadium replaced as part of a $95.14 million redevelopment of the facility.

Announcing the construction deal Western Australian Sport and Recreation Minister Terry Waldron said he was delighted a new permanent southern stand and seating of the northern bowl would also be achieved within the budget.

Minister Waldron stated "I am very pleased with the work the Department of Sport and Recreation and Building Management and Works has done in including this scope of work within our $95.14million budget.

"This is a fantastic result for our rectangular sporting codes as the redevelopment will provide a huge boost to the stadium amenity and, in turn, will provide a much better spectator experience.

"Works will start on site on 2nd July following the last home game of the Western Force's 2012 Super Rugby season. Completion of the major construction works is anticipated in March 2013."

The redevelopment will consist of a covered eastern grandstand complete with new food, beverage and toilet facilities, a 250-seat barbecue terrace and seating for approximately 420 patrons in open corporate boxes.

A new uncovered permanent southern stand, two large video replay boards, a new whole-of-stadium PA system, CCTV surveillance system and new pitch lighting will also be included. A new playing surface will be installed between July and October 2013, with the seating in the northern bowl area going in at the same time.