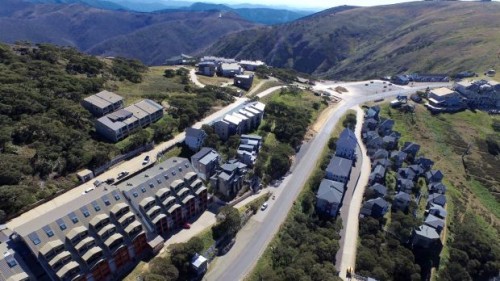 The Victorian Government has selected developer Ben Genser’s Belgrave Group, from a shortlist which also included Rino Grollo, to develop what was marketed as “the most significant site ever offered in the Australian alps”.

The site of the Mount Hotham Alpine Resort Management Board (MHARMB) office occupies a 1905 metre² plot acknowledged by the Victorian Government in its tender last year as “universally regarded as the best location in Mount Hotham”.

Elevated and abutting the Corall car park on its eastern boundary, the block at 28 Great Alpine Road is opposite Hotham Central, White Crystal Apartments and a short distance to the helipad and Road Runner chairlift.

Belgrave Group is now expected to develop a five-level mixed use building including a new MHARMB headquarters, offices for ski patrol services, a medical centre, retail, residential apartments and a hotel component.

Avid skier John Castran, Director of Melbourne agency Castran which has an alpine real estate division, marketed the block for the Victorian Government last year. He said the site was hotly contested before the government shortlisted three contenders in about October.

Also in the Mount Hotham region in recent months, a Singaporean group paid $4.8 million for a day spa at 125 Big Muster Drive, Dinner Plain, which upon the lease expiring will be converted into a cancer clinic/wellness centre.

Wyndham Vacation Resorts South Pacific has also recently made a major Dinner Plain acquisition, acquiring the Peppers Rundells Alpine Lodge. It has also paid varying prices ranging from $195,000 to $1.75 million to acquire another 36 chalets in the popular winter holiday area.

In 2015 the Ski Club of Victoria turned property developer at Mt Buller, unveiling plans to replace a central property with a four-level apartment and hospitality complex, The Whitt, for its members and guests.