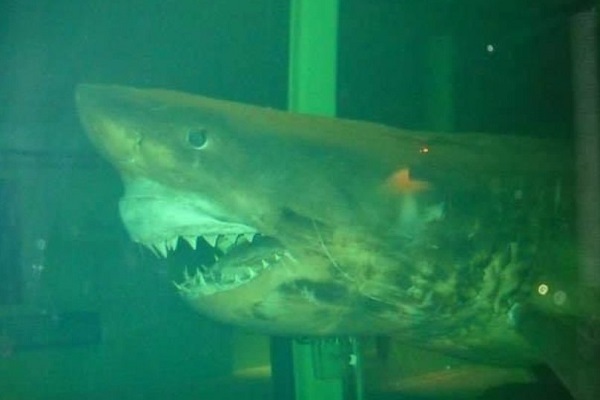 An unusual campaign is growing to save an embalmed five-metre great white shark discovered languishing in a tank in an abandoned wildlife park.

Rosie, as the shark has been dubbed, has been alone in her tank at Victoria’s former Wildlife Wonderland since 2012.

The shark was captured in tuna fishing nets off South Australia in 1998 and her body was sent to the park at Bass, south-east of Melbourne as an exhibit.

Left undisturbed when Wildlife Wonderland closed seven years ago, she was recently discovered by a group of trespassers who posted footage of the attraction on YouTube.

The popularity of the video has led to some unwelcome visitors for Rosie, with vandals reportedly trying to smash the tank.

As advised on the Save Rosie the Shark Facebook page “vandals have trespassed into the private property and tried their best to smash Rosie’s tank. The glass is over three inches (7.5 centimetres) thick, and neighbours believe these vandals have used sledge hammers to try and break the glass.

“Large cracks have now appeared and the dangerous liquid, formaldehyde, is slowly seeping from the tank out into the open.

“We need to act fast and save Rosie. She needs to be given the final resting place she rightly deserves.”

The page’s organiser has urged people not to enter the abandoned wildlife park, warning “as much as we all want to save Rosie, I do not condone trespassing onto private property to go take videos and photos of her.

“Police locked the shed her tank is in and already vandals have broken the lock to get in.

“Please do not go onto this private property. We want to save her remains but do it the proper, legal way.”

Police have also implored people to stay out of the abandoned park.

“This location is on private property, so we advise the public not to attend the area,” they wrote on the Bass Coast police area’s Eyewatch Facebook page on Friday.

“You run the risk of being charged with trespassing offences.”

The Facebook page’s organiser wants the shark to be rescued by a museum or aquarium - or even another wildlife park.

Image: Rosie the shark in her leaky tank at the abandoned Wildlife Wonderland. Facebook/ Save Rosie the Shark.