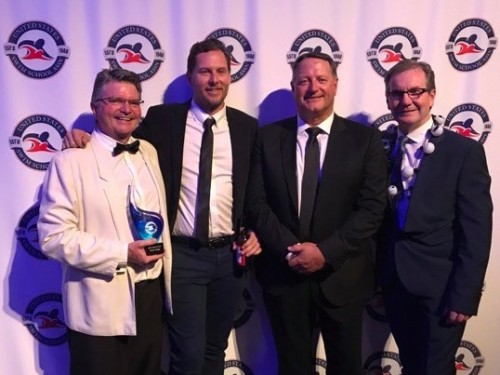 Recognising a virtual lifetime in swimming, his driving of the rise in professionalism in the swim school industry and ASSA’s formation of strategic alliances with the USSSA, Gage’s admission to the Hall of Fame was announced at the USSSA National Conference last week.

Significantly, Gage has been instrumental in developing a range of program, information and idea sharing arrangements between Australia and the USSSA. He has also actively participated in the annual USSSA Conference since 1993.

Welcoming Gage’s recognition, ASSA President Wayne Pollock noted “whilst (this is) due recognition for Ross, it also marked the significance of the ASSA - USSSA Alliance.”

Presented during the USSSA’s Gala Dinner at their National Conference, world swimming icons, Laurie Lawrence (sport and water safety) and John Coutts (swim schools) also paid tribute to Gage, speaking of his success in raising the bar for swim schools and removing GST from ‘swimming lessons’.