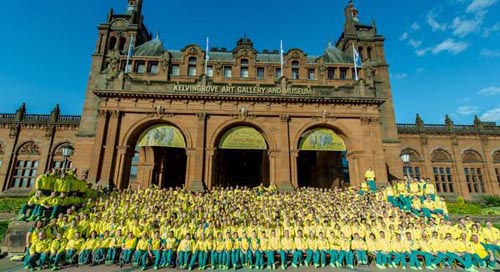 Kelvingrove Art Gallery and Museum was established in 1901, the same year that the Commonwealth of Australia burst into life as a young nation. It was therefore quite fitting that the 2014 Australian Commonwealth Games Team descended upon the venue to formally launch the start of the campaign to be the top sporting nation in the Commonwealth.

The men and women who will wear the green and gold representing 17 sports looked resplendent in their team tracksuits. The striking combination of our national colours made quite an impact as more than 400 athletes posed for the official team photo.

I was impressed by the sense of "team" among the entire athlete contingent. The notion of belonging to something bigger than one's own individual event or performance was there among the room of the young men and women about to represent Australia. Some have been here before and know the road ahead and some are here for the first time as nervous as the first day of school.

The mood among the athletes I talked to on the evening was one of anticipation and excitement. For many young athletes, like diver Georgia Sheehan, it is the culmination of years of effort and childhood dreams. For a seasoned athlete like netballer Bianca Chatfield, our brief discussion was focussed on another opportunity to participate at this high level.

For many of the athletes I have spoken to in my short time here, the chance to represent their country, to proudly pull on the green and gold uniform, to strive to achieve their personal best has made all of their sacrifice on the training track, on the field of play or following that black line in the pools around the nation worth it.

While some may question the role of the Commonwealth Games as an event, it is undeniably clear that for the athletes here in Glasgow the sense of occasion and their moment, their test, their time has finally arrived.

Some may also say that our targeted approach on high performance through Australia's Winning Edge is too calculated and too narrow in its focus. We are unapologetic about this as our investment of $100 million in Australian high performance sport aims high.

The Australian Sports Commission and the Australian Institute of Sport are key partners with all of the sports attending Glasgow over these two weeks.

We take pride in the fact that our investment of taxpayers dollars allows many Australians to compete at high levels such as these Games; which in turn inspires and encourages many more boys and girls and men and women to play sport.

We know that all Australians will be cheering on our contingent of athletes who on the eve of these 2014 Commonwealth Games are about to enter the arena representing their country and their families and friends who have supported them throughout the journey.

The mood of the crowd at the famous Celtic Park tonight at the opening ceremony was one of celebration.

Rod Stewart is a favourite son of Scotland and tonight his song Rhythm of my Heart echoed around Parkhead. There's a recurring line "the rhythm of my heart is beating like a drum..." that can get stuck in your head and the sight of Anna Meares carrying the Australian flag ahead of her teammates sure does get one’s heart beating with pride.

The stage is now set for 11 days of fierce competition and we look forward to seeing many more Australian flags flying here in Glasgow.

For more information go to www.ausport.gov.au