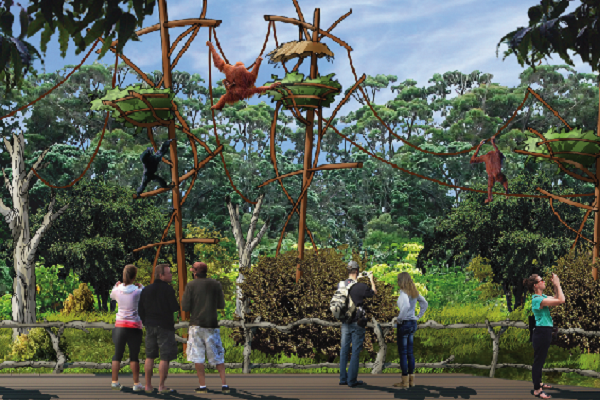 Auckland Zoo is undergoing a $58 million redevelopment project that will see the creation of a new South East Asia precinct as part of its 10-year Future Zoo development plan.

Funded through Auckland Council’s long-term plan, construction on the two-year project - which will feature four major areas, a siamang and orangutan habitat, tiger and otter habitats, the Indonesian swamp forest, and a new restaurant - is underway.

A transparent, climate-controlled dome, based on an Indonesian swamp forest, will house a new species of crocodiles, as well as reptiles and fish.

Commenting on the expansion, Auckland Zoo Director, Kevin Buley stated "as the forested backdrop and surrounding planting come into view, we’re starting to get a strong sense of the immersive landscape that the South East Asia precinct will become.

“As we continue to grow and evolve before our visitors’ eyes, we actually now have more animals and species for them to visit and learn about – and more are coming.

“We also have a team who are able to wander the zoo with the animals in their care and give visitors more up-close impromptu experiences.

“We take our role as kaitiaki of Auckland’s zoo seriously, and everything we are doing is to continue to make it better for our community - animals, staff and visitors - and our newer developments like our Australia precinct and African Savannah extension demonstrate this.”

As part of the Future Zoo project, Auckland Zoo is also building a new restaurant and function venue overlooking the central lake and new wetlands area.

The elevated dining experience will see orangutans and gibbons looking on from above via a network of climbing structures.

South East Asia at Auckland Zoo is scheduled for completion in the first half of 2020.