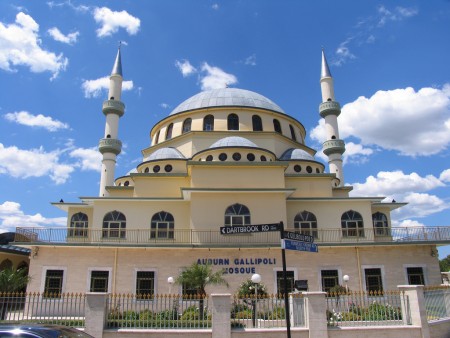 In advance of ANZAC Day, the National Trust has listed the Gallipoli Mosque in the Sydney suburb of Auburn on its Register.

The mosque is the second mosque listed by the Trust in NSW after the Broken Hill Mosque.

Explaining the listing, National Trust Advocacy Manager Graham Quint stated "the Trust has recognised the mosqueâs landmark qualities beside the Main Western Railway Line and the buildingâs beautiful interiors which are enhanced by the various Turkish artisan designed and imported finishes and fixtures.

"The Mosque incorporates classic Ottoman architecture characterised by the central dome and minarets and its carpet was designed in Istanbul. The exterior's qualities are enhanced by the marble and stone imported from Turkey.

"The Trust also recognizes this buildingâs significance to the Australian Turkish Muslim community as a centre for religion and for the Islamic community, providing linguistic education, community and cultural
activities."

In the early 1970s the Auburn Turkish community purchased a house on the site of the current Mosque, which they used as a place of worship. Over the years adjacent sites were purchased and the property consolidated.

The Auburn Gallipoli Mosque has been named in honour of the unity and early relationship between Turkey and Australia during the First World War at Gallipoli (Gelibolu).

Today the relationship between these two nations is further reinforced as the Turkish flag is displayed at ANZAC marches.