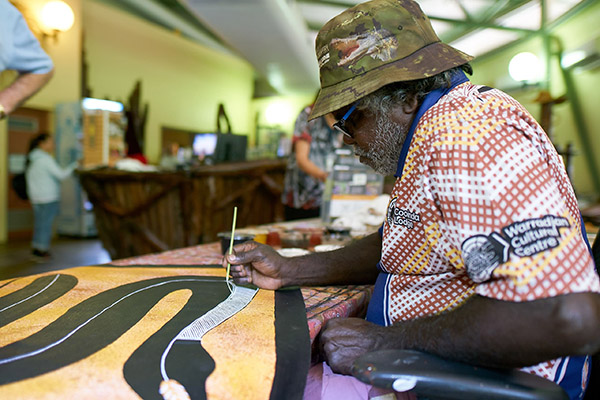 Alongside plans for major investment to enhance tourist access around the Kakadu National Park, there are upgrades currently taking place to major attractions, including the Warradjan Cultural Centre, and to the longest-established accommodation base, Cooinda.

Confirmation last year by the Federal and Northern Territory governments of major infrastructure spending, and plans to establish Jabiru as a tourism hub, see a promising future for Kakadu National Park’s tourism.

The Warradjan Cultural Centre, which provides a full interactive narrative of Kakadu’s Indigenous history and culture, is expected to reopen by April following its refurbishment and upgrade.

Cooinda Lodge last year completed a full renovation of all its Lodge rooms and opened the Dreaming@HomeBillabong glamping village. The glamping site is receiving additional investment in the upgrade of its bathroom and amenities block. 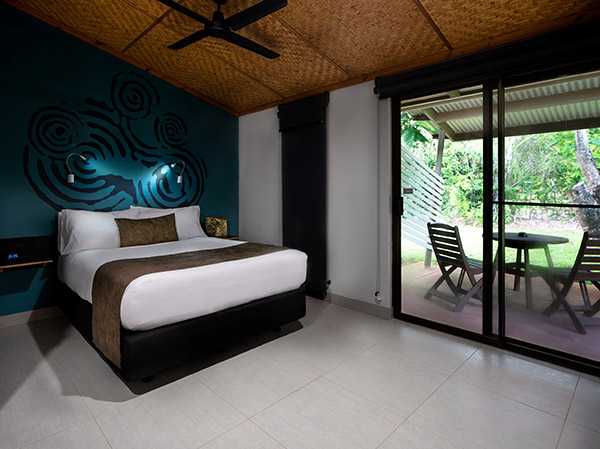 Cooinda’s popular Mimi’s Restaurant is being redesigned to provide a fresh new dining venue, and additional pop-up dining options – including a Barra & Chip van, Gelato Cart, Barista station and portable bar will be in place for Kakadu’s peak season.

The addition of the Dreaming@HomeBillabong glamping tents represented the first new accommodation to open in Kakadu for over a decade.

Established on its own exclusive site in the grounds of Cooinda Lodge & Camping Grounds, Dreaming@HomeBillabong offers 20 permanent upmarket Outback Retreat tents, set beneath a canopy of shady trees.

Along with ten glamping tents for couples, there are ten tents with a separate annex of two bunk beds, making them ideal for families and friends travelling together. 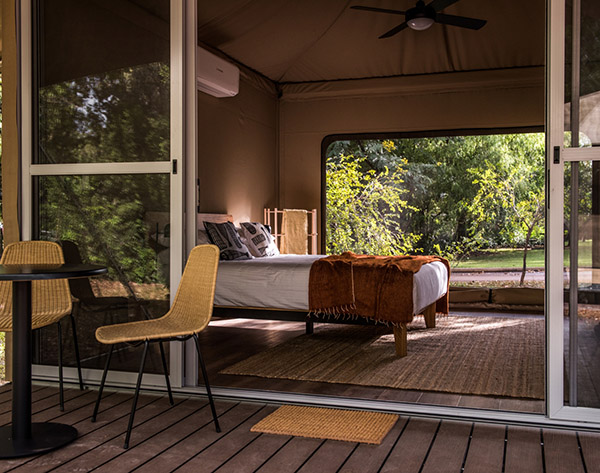 The new glamping tents are built on wooden platforms to ensure year-round usability and minimal environmental impact. The canvas tents have one solid wall, a glass front door and a deck with outdoor furniture. All bedding feature high quality mattresses, toppers and linen.

The tents have electric lighting, air-conditioning, fan and bar fridge, and USB charging ports, along with cabinetry, occasional chairs and locally produced Indigenous weaving and artwork. Dreaming@Home Billabong has its own dedicated share bathroom and amenities centre.

The tented village site enjoys a premium position in the campground close to Home Billabong and the hotel’s reception area and guest facilities, which include restaurants, two swimming pools, general store and petrol station.

Jabiru – home of the Mercure Kakadu Crocodile Hotel (aka The Croc) – is set to receive a $135 million injection of funding over the next four years to transition Jabiru into the tourism and cultural centre for the World Heritage-listed Kakadu National Park.

The Jabiru masterplan will see a new town centre established around Jabiru Lake with a series of integrated paths, boardwalks, swimming areas and wetland established, with the signature development being the World Heritage Interpretation Centre on the edge of the lake and wetland, showcasing the region, its people and heritage.

The Mercure has upgraded its WiFi service and introduced Indigenous theming to its rooms.

Mercure Kakadu and Coonida Lodge will once again be venues for A Taste of Kakadu, Australia’s premier Indigenous food festival, which will be held from 22nd to 31st May.

The Festival invites people to experience the majesty of Kakadu by getting a taste of its natural abundance. Amongst the events, Cooinda Lodge will be offering a Sunset Canape Cruise on beautiful Yellow Water Billabong each day during the event, as well as ‘Dinner under the Stars’ on the Cooinda Airstrip. Warradjan Cultural Centre will host weaving and painting sessions and ground ovens and damper making.

Mercure Kakadu Crocodile Hotel will stage a number of events including a sunset art event combining Kakadu-inspired canapes and sunset beverages at a pop-up art exhibition on the lawns of the famed Crocodile Hotel, with local artists creating and showcasing their artwork.

Cooinda Lodge and Mercure Kakadu Crocodile Hotel will both have special accommodation deals during the Festival. For full details of the Festival go to https://parksaustralia.gov.au/kakadu/taste/