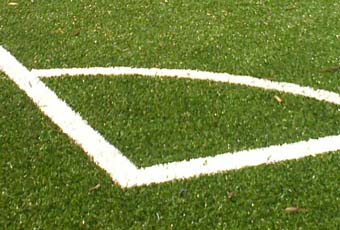 While the media storm over the safety of rubber infill in synthetic surfaces created by Sydney newspaper The Sun-Herald is confusing synthetic grass products with artificial sports turf using rubber infill, Australasian Leisure Management is highlighting that options other than recycled rubber can be used with artificial turf surfaces.

A feature, 'Filling In', published in the May/June 2010 issue of Australasian Leisure Management read as follows:

A key and emerging issue in the use of synthetic surfaces relates to the use of rubber pellets, derived from recycled tyres, for turf infill and the temperatures that artificial turf surfaces can reach in hot conditions.

For athletes, the little black rubber pellets used as infill on early generation artificial turf surfaces can be a nuisance. However, some environmental groups have expressed well publicised concerns about the toxicity of chemicals within the recycled rubber.

The concerns focuses on crumbs from the material becoming airborne and being breathed in and tracked into homes on clothes and sporting gear, and the water runoff from artificial turf surfaces contaminating water systems such as rivers, creeks, lakes and dams.

The influential 2008 report from researchers at the University of Ballarat (Development of Standards for the Use of Artificial Surfaces for Australian Football and Cricket by Twomey D, Otago L, Saunders N, and Schwarz E.) indicated that water runoff from artificial surfaces had no environmental impact on organisms, and met all the State and Federal water quality standards. The study also showed that runoffs from natural turf fields into water systems contain chemical fertilisers and pesticides.

Artificial surfaces also heat up significantly more than natural turf, with the 2008 University of Ballarat study finding that they can reach temperatures up to 40% higher than natural turf on hot sunny days.

To counter this, given that most sports have heat policies that restrict play when temperatures reach a certain level in hot climates, such policies may need to be adapted for artificial turf.

With recycled rubber also suffering compaction problems that reduce the playability of surface over time, manufacturers of third and fourth generation artificial surfaces are moving away from recycled rubber infill preferring sand and plant-based materials.

Used in conjunction with its synthetic surfaces, Limonta’s InfillPro Geo is an organic material of plant origin. Created in 2003, and with more than 150 pitch installations worldwide, the product is environmentally friendly and can be recycled for agricultural use when the arti¬ficial turf comes to the end of its life (usually a period of around ten years).

Envirofill is also used in TEAM Sports fourth generation Enviroturf product while the Sydney-based manufacturer has used a mix of sand and rubber infill for its third generation FIFA 1 and 2-Star artificial turf systems.

Meanwhile, the ongoing beat up of synthetic surfaces and the confusion of synthetic grass products with artificial sports turf using rubber infill continues at www.youtube.com/watch?v=ZenmB7c8mvg