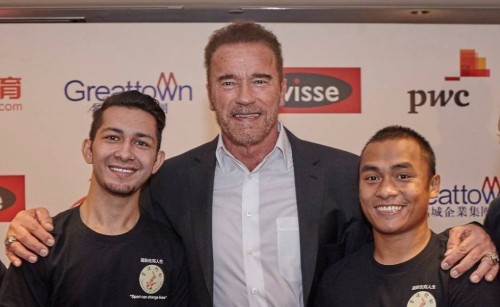 Arnold Schwarzenegger’s multi-sports event, the Arnold Classic, has begun its first ever event in Hong Kong.

With a business lunch held yesterday (Friday 19th August), the Arnold Classic Asia Multi-Sport Festival will continue today and tomorrow (20th and 21st August) with amateur and professional bodybuilding shows, a health and fitness exhitions, competitions in arm wrestling, bodybuilding and skateboarding and demonstrations of sports including  Cross Fit and rugby.

Part of a worldwide expansion of the Arnold Classic concept, the event, being held at the AsiaWorld-Expo, is a partnership between Classic Productions, Inc., Tony Doherty, promoter of Arnold Classic Australia, and Hong Kong businessman Richard Petty.

“If you look in the mirror at night you should be able to say, ‘Today I learned a whole bunch of new things’.”

The former actor, bodybuilding champion and governor of California told reporters he still gets up at 5am every day to go to the gym and work out, adding “you have a choice to live or to just exist.”

Meeting with fans at the event, he encouraged people to exercise, continuing “you maybe like gymnastics ... I maybe like bodybuilding, but your exercise is as important as my exercise is.

“We want to celebrate and bring everyone together."

Hong Kong is the first city in Asia to host the event and will stage the second edition of the event next year.