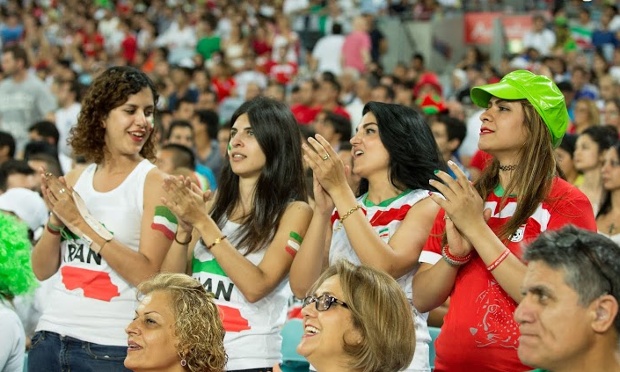 The Asian Football Confederation (AFC) has dropped any pretention of standing up for universal standards for equality in sports by endorsing bans on women attending football matches in stadia.

In doing so, the AFC has confirmed policies adopted by the West Asian Football Federation (WAFF) and world football governing body FIFA that effectively supports autocratic or illiberal democratic regimes in the Middle East and North Africa.

The confirmation came in remarks by AFC General Secretary Dato' Alex Soosay to Agence France Press (AFP) that he is “happy” to respect Iranian laws that ban women from watching male football matches in stadia.

By implication, Soosay could have also been referring to Saudi Arabia which, like Iran, bans women from stadia, and in contrast to the Islamic republic, refuses to legalize or encourage women’s football.

“In Australia there’s a big Iranian community and you can’t stop them from coming to the stadium because there’s no restrictions here.

“Whereas in Iran, there has been some restrictions of women entering the stadium and watching a football match.”

Soosay made his remarks after the Iranian Football Federation warned members of its national team competing in the Asian Cup in Australia not to take selfies with female Australian-Iranian football fans the majority of whom do not adhere to the Islamic republic’s strict dress code for women.

“National team players should be aware that they won’t be used as a political tool by those who take pictures with them,” Ali Akbar Mohamedzade, the Head of the Islamic Republic of Iran Football Federation moral committee, told Iran’s Shahrvand newspaper.

Soosay’s remarks appear to be at odds with an increased focus on human and women’s rights by the International Olympic Committee (IOC) and other global sports associations. IOC officials have, in recent months, privately encouraged human rights groups to take Saudi Arabia to task for its failure to allow women to freely compete in all disciplines of the Olympics.

Soosay’s remarks further contrast starkly with a warning to Iran by the International Volleyball Federation (FIVB) that it would be stripped of its right to host the 2015 Under-19 men’s world volleyball championship if it bans women from attending matches. The FIVB stance is relevant to the AFC given that Iran is widely seen as a frontrunner in the bidding for the right to host 2019 Asian Cup.

A FIVB spokesman said in November that his federation "will not give Iran the right to host any future FIVB directly controlled events such as World Championships, especially under age, until the ban on women attending volleyball matches is lifted.”

The FIVB has asked Argentina to stand-by to replace Iran as the host of the tournament. In a statement, FIVB president Ary Graca said that "women throughout the world should be allowed to watch and participate in volleyball on an equal basis."

The FIVB made its decision after talks with Human Rights Watch, which has also met with IOC president Thomas Bach. The meeting with the IOC President marked a new era in the group’s attitude towards human rights. Bach’s predecessor, Jacques Rogge, refused to meet with human rights groups during his tenure.

Soosay’s remarks further violate a resolution adopted two years ago by WAFF and endorsed by Iran that called for putting women’s sporting rights on par with those of men.

The AFC official’s remarks came against the backdrop of recent international outrage at the charging of a British-Iranian law graduate for attempting to enter a stadium to watch a men’s volleyball match. Ghoncheh Ghavami was detained in June. She twice went on hunger strike before being released on bail as she awaits trial.

Soosay defended his comments by noting that visiting female officials and media attending AFC events in Iran have been allowed into stadiums, provided they covered their hair.

He added “you have to respect that they have to cover themselves.

“There is a code of attire which has to be respected. If it’s done in Iran there’s no issue at all.”

His remarks related to foreign women who were members of visiting delegations and are subject to different rules from those that apply to women fans.

By endorsing discriminatory Iranian policies, Soosay effectively reiterated the AFC’s longstanding refusal to insist on adherence by Middle Eastern football associations to its principles, rules and regulations. That refusal amounts to effective support for autocratic rule in a football crazy region where rulers see the game as a key tool to retain power by exercising absolute control of public space and an institution that evokes deep-seated passions.

Over the years, the refusal has had far-reaching consequences for the AFC, no more so since 2002 when Qatari national Mohammed Bin Hammam became the group’s president until he was banned for life by FIFA from involvement in professional football eleven years later, and under the reign of his Bahraini nemesis and successor, Sheikh Salman Bin Ebrahim Al Khalifa.

The governance of both men reflects the autocratic traits of the societies they hail from. Both men are imperious, ambitious and have worked assiduously to concentrate power in their hands and side line their critics clamouring for reform. Both men, hailing from countries governed by absolute, hereditary leaders, have been accused of being willing to occupy their seats of power at whatever price.

As a result, Soosay’s remarks fit the mould of AFC governance. Sheikh Salman recently used a proposal to recognize Central Asia as a separate football region in Asia to eliminate the post of a woman AFC vice president.

That post is currently held by Australian Moya Dodd, a prominent reformer whose views challenge those held by Messrs. Salman and Soosay.

James M. Dorsey is a senior fellow at the S. Rajaratnam School of International Studies, co-Director of the University of Wuerzburg’s Institute for Fan Culture, a syndicated columnist, and the author of The Turbulent World of Middle East Soccer blog and a forthcoming book with the same title.