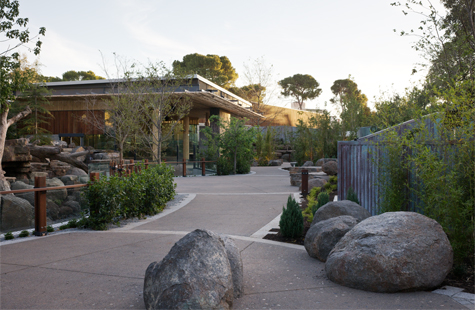 Adelaide Zoo was forced to close today (Friday 27th May) after would-be thieves blew up an ATM at the gift shop.

A security patrol found the front of the ATM on Plane Tree Drive had been badly damaged after responding to an alarm about 3:30am.

Explosives experts examined the area and the Zoo was shut as bomb technicians investigated a red liquid on the ground.

South Australian Police Sergeant Phil Clague said it is believed the liquid was a modified and volatile substance that is used in the industrial sector with hardened plastics.

But he said the ATM was able to withstand the blast, and the culprits fled empty-handed, telling the ABC "ATMs are basically a safe with a computer on the front so they are built to withstand a significant attempt to gain entry to them..

"I've been told this is the first time that this kind of explosive substance has been used in Australia."

Students were staying at the Zoo overnight but Police said they did not hear the explosion.

Booked groups were initially allowed to enter the Zoo, but were eventually evacuated.

Bensted said no animals were injured or harmed during the incident, advising “animals close to the exclusion zone during the police investigation were moved to their night quarters as a precaution.”

The retail shop will remain closed over the weekend as the ATM machine is repaired and Police continue their investigation.

Adelaide Zoo's Russell Schrale conclude “it's incredibly disappointing that someone would not only conduct a crime such as this, but also on a conservation charity.

"This is going to cost the zoo money, which takes money out of our conservation programs.”

South Australian Police are seeking anyone who may have seen or heard anything to come forward.