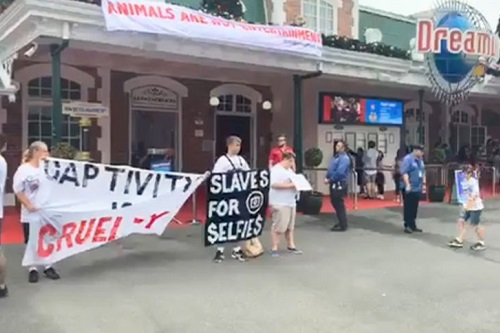 Following a protest at Sea World on Saturday, several members of the Justice for Captives group accessed the roof above Dreamworld's front entrance wearing animal masks, while others lined up in front of the gates holding signs.

In a series of posts to their Facebook page, the group said they were protesting against Dreamworld's tiger conservation program, stating that they were "making a stand" to raise awareness about the use of animals for profit under the guise of education and conservation.

One of the posts read "Dreamworld is a zoo disguised as a theme park and houses over 400 animals in very small and unnatural enclosures.

"Whilst we respect the collection of donations for global wildlife conservation programs, Justice for Captives disagree that animals should be put on display and exploited for photo opportunities and tourism 'experiences' in the process."

The protests continued on Saturday night with activists running into the arena during a performance of Australian Outback Spectacular.

Six of the protestors were arrested following the Sea World incident and charged with public nuisance.

Queensland Police said the Dreamworld protest was peaceful and had not disrupted the theme park's operations.

In a statement, a spokesman for Village Roadshow Theme Parks (VRTP), which run the Australian Outback Spectacular show, said Saturday night's performance was temporarily paused for the safety of the animals and team members.

VRTP Communications Manager Mitchell Olivey advised "while we are aware that some people do not support the idea of animals in human care, we are proud of our passionate team, our world-class facilities and our position as a global community leader in conservation and education.

"We welcome constructive and professional dialogue with activist groups in a respectful manner and find the tactics of this group unprofessional and dangerous, not only to themselves but to the animals and guests.

"The welfare and wellbeing of animals is of the highest priority at Australian Outback Spectacular and we employ a full-time veterinary and animal care team."