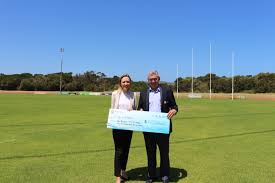 The final latest round of monies to be distributed by the Community Sporting and Recreation Facilities Fund prior to the Western Australian election will see $3.5 million spent on 10 regional sport and recreation projects.

Part of an $11.9 million commitment for community projects in latest round in metropolitan and regional areas, the funding will include $110,240 going towards upgrading the lighting Albany’s Collingwood Park - home to 1,500 sporting club members from AFL cricket and touch rugby.

The regional funding commitements followed the announcement of $8.4 million for 16 metropolitan projects, bringing the total investment to $11.9 million as part of the latest CSRFF round.

Commenting on the allocations, outgoing Western Australian Sport and Recreation Minister Mia Davies stated “sporting clubs are the life blood of local communities, which is why the (Western Australian) Government has made an unprecedented investment in grassroots sporting facilities in our regions, as well as other regional sporting grants to help athletes who live and train in country Western Australia."

The Government is also investing $15 million in the Centennial Park redevelopment in Albany.