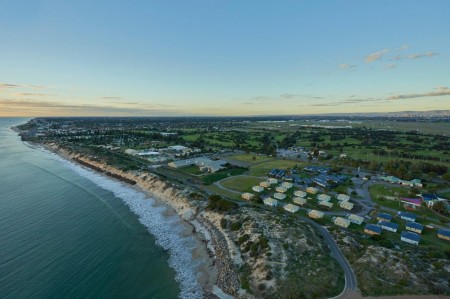 Women's and junior football will be among the major beneficiaries of a $2.5 million redevelopment of the Adelaide Shores playing fields in West Adelaide according to South Australian Sports Minister Leon Bignell.

Marking the start of the works, Minister Bignell said the new and expanded facilities, which include floodlit synthetic pitches, change rooms and a meeting room, will open up new opportunities for South Australian sportsmen and women.

Adelaide Shores is a 135 hectare tourism and recreation reserve on Adelaide's West Beach with commercial and community services including accommodation, golf, boating, a coast park, café and dining areas, skate and BMX park and sports grounds.

The project to expand the sports playing fields is being run by Adelaide Shores and the Football Federation of South Australia.

The $2.51 million funding for the work includes:

• $1 million from the Federal Government,

Minister Bignell added "the business case for the expansion was really strong and through the co-operation of the State and Federal governments and the Football Federation of South Australia, we've achieved a $2.5 million investment.

"There's nothing like a really good, modern, sports complex to encourage people to get out and get involved in sport, fitness and recreational activities."

Football Federation of SA (FFS) Chief Executive Michael Carter believes that investment in infrastructure is important in dealing with the growth of football and that the project will offer opportunities to men, women, girls and boys of all abilities and ages.

Carter stated "this is the first FIFA approved artificial pitch in South Australia and it will offer unrestricted access.

"We already have more than 150 catch-up games waiting to be played across FFSA competitions due to the overuse of pitches and heavy rainfall."

Funding of the first stage of the Adelaide Shores Master Plan has been provided by the South Australian and Federal Governments, as well as FFSA, Green Play Australia and Adelaide Shores.

The Adelaide Shores precinct is also set to benefit from a recent announcement of $2 million of South Australian Government funding for the development of the SA State Diamond Sport Centre for softball and baseball.

For more information go to www.adelaideshores.com.au