Zorb inventors under fire in US 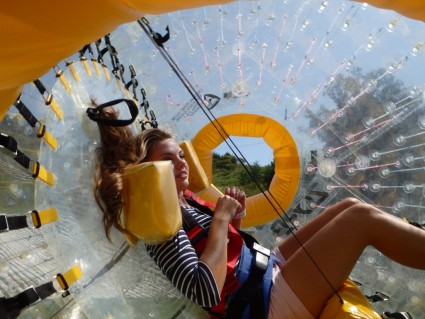 The New Zealand-based creators of the 'Zorb' inflatable ball ride are battling to save their reputation in the USA after a high profile accident in a fake version of their ball.

An American reporter received a serious back injury during a media preview of the 'sphereing' device at Maine, USA's Lost Valley Ski Resort when the device hit a post and bounced nearly three metres in the air.

The device, marketed as a 'Zorb', was owned by Zorb New England and was apparently operating without a permit - the operators reportedly unaware that they needed a permit and safety inspection before they could offer rides to the public.

Zorb New England have also previously been embroiled in a legal dispute with New Zealand's Zorb Limited, the inventor of the device, over use of the Zorb name.

Craig Horrocks, Chief Executive of Zorb Limited, recently stated that his company has had issues with "rogue and fake operators," and that there is only one official Zorb site in the USA. However, Zorb New England co-manager

Jeremy Coito maintains that "Zorbing is a generic trademark, a sport" and that he can rightfully use its name.

Sphereing (or Zorbing) is the practice of travelling in a sphere, generally made of transparent plastic, down a gentle slope where the rider rolls within the device. The activity was developed in New Zealand in the mid 1990s by then partners Dwayne van der Sluis, Andrew Akers and Craig Horrocks.

For more information on Zorb Limited go to www.zorb.com