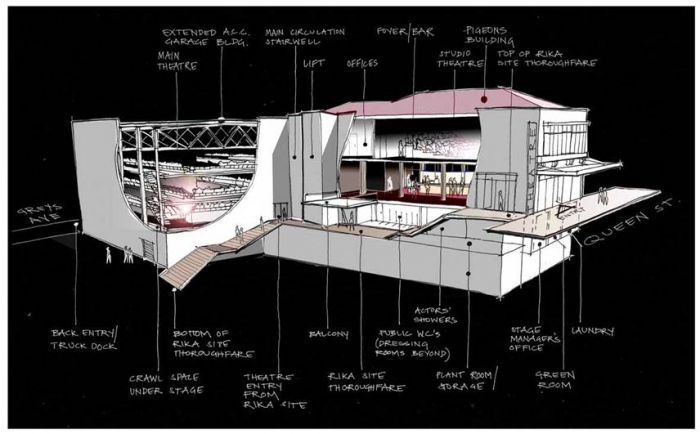 The ground breaking ceremony for Auckland's new Q Theatre has been held.

The new theatre, being built on the site of a car park next to the Auckland Town Hall, will provide a new multi-purpose theatre for the performing arts.

Auckland Mayor John Banks officially launched the building phase for the theatre, which is set to be completed in less than two years.

The new theatre has been designed by Auckland based Cheshire Architects who will work alongside Williams Ross, a Melbourne firm with specialist theatre design experience.

In launching the building phase of the project Mayor Banks compared its significance to that of the building of the Art Gallery, the Museum and the Aotea Centre.

Mayor Banks also spoke of the efforts of the Q Theatre management and supporters over more than a decade to realise the project.

It is planned that Q Theatre will create a home for the performing arts in Auckland by providing access to a variety of production companies and attracting a wide range of audiences. It will bring together theatre, dance, musicals, comedy, cabaret, opera and concerts.

Mayor Banks explained "this project has been more than 10 years in the making ... it is really very rewarding to see it come to fruition. The new theatre will complement the other facilities in the area that contribute so much to enlivening the cultural life of our wonderful city."

The project cost will be a just over $21 million with Auckland City Council, the foundation partner of Q Theatre committing land and buildings to the project, as well as a capital contribution of $9.6 million along with ongoing operational support. The Lotteries Board contributed $6 million, the ASB Community Trust $4.5 million with the remainder being raised from private funders and donations.

Jennifer Gill, Chief Executive of ASB Community Trust spoke about the need for the new theatre to cope with Auckland burgeoning theatre scene. She noted that "the Trust supports projects that foster access, engagement and experience in the arts and cultural opportunities for all of our regionâs citizens. This new modern facility will be a creative hub which will fill a long-term gap in Aucklandâs arts infrastructure, enhancing opportunities to experience national and international performing arts."

Q Theatre is one of ASB Community Trustâs largest funded projects, and in November 2008, the Lottery Grants Board became Q Theatreâs third major funder, through the Significant Projects Fund which is aimed at developing and preserving New Zealandâs culture and national identity through community participation.

Susanne Ritzenhoff, General Manager of Q Theatre commented on the progress, "the arts community canât wait to stage its first productions in Q Theatre. Q will create a much awaited space where creative minds can come together and spark off one another. It will be a facility that is an exciting destination for Aucklanders and its visitors, bringing more life and energy to Queen Street, and substantially enhancing the cityâs cultural landscape.

"Today we mark a truly significant milestone for this project."