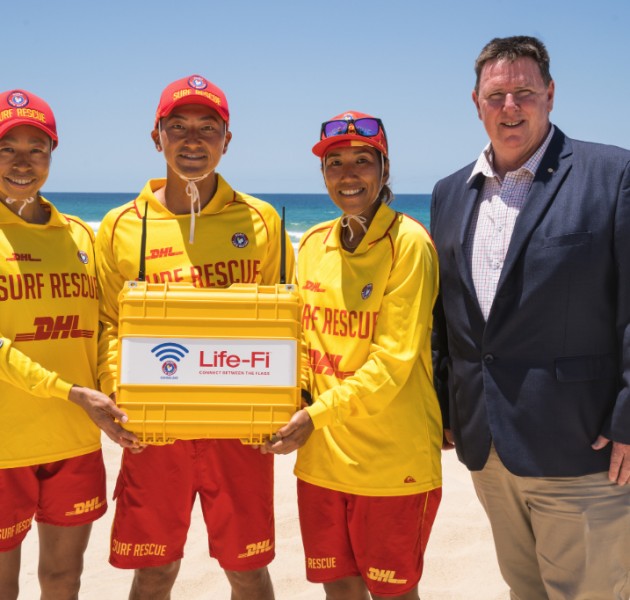 A Wi-Fi system that will allow surf life savers to send alerts to mobile phones to keep beachgoers safe will be rolled out across all Queensland beaches in time for summer.

In the past 10 years there have been 75 drownings recorded on Queensland beaches and, of these, 31 victims (41%) were international tourists or recent migrants. Meanwhile, of the 5,000+ rescues performed by Queensland’s surf lifesavers and lifeguards since January 2017, almost 80% have occurred outside of the red and yellow flags.

In response, Surf Life Saving Queensland (SLSQ) has worked with Actify Live and Romeo to develop mobile Wi-Fi technology between the red and yellow flags, capable of pushing out real-time surf safety alerts in seven different languages. The new technology, called Life-Fi, will allow beachgoers to access unlimited free Wi-Fi between the flags along with a live feed of multilingual information on conditions, closures, and other safety tips.

Initially Life-Fi will communicate safety information in English, Arabic, Hindi, Simplified and Traditional Chinese, Japanese, and Thai, with opportunities to expand on the number of languages moving forward.

“This is a great win for the Gold Coast,” she said.

“By funding this initiative through our $34 million Connecting with Asia strategy we’re bringing this tool to life just in time for the tourism industry’s busiest season.”

“The research shows that two of Queensland tourism’s biggest selling points are its beaches and its reputation as a safe place to visit,” she said.

“There is no doubt this system will save lives.

“If we can make people feel safe, we know we’ll lure more people to the beach – this is a great outcome for our tourism industry.”

“We want to give Queensland lifesavers the cutting-edge technology they need to make our beaches the safest in the world,” she said.

“That’s why 10 surf lifesaving clubs will receive Life-Fi later this year, with a further four mobile devices moving along the coast as needed.”

SLSQ Chief Executive John Brennan OAM thanked the Queensland Government for its vital support, saying Life-Fi would play a key role in protecting both international and domestic beachgoers this summer.

“For us, the benefits of Life-Fi are two-fold; it’s a great way to encourage all swimmers to stay between the flags, but it’s also a wonderful platform to provide live information on conditions and safety tips, particularly to international tourists in their own language,” he said.

“It’s not uncommon to see international beachgoers who don’t speak English and who don’t have a lot of experience in the surf, and it can be a really challenging situation for our lifesavers and lifeguards.

“Even trying to communicate simple messages such as ‘swim between the flags’ or ‘watch out for that rip’ can be almost impossible at times when you don’t speak the same language.

“We can use Life-Fi to educate and engage with all beachgoers, be it international or domestic, and that could literally mean the difference between a drowning and a positive outcome in the right circumstances.”