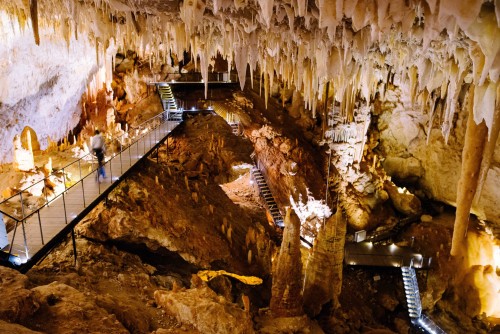 Western Australia's Augusta Jewel Cave has been reopened - and is now sparkling more than ever following a multi-million dollar polish.

During the past year, a $3.1million redevelopment has transformed the popular tourist attraction, with upgrades made to both preserve and enhance the ancient wonder.

As part of the revamp, 50-year-old buildings and associated infrastructure were removed, a new cave entrance and tunnel constructed, and a striking new visitor centre housing a cafe, shop and interpretative display built.

Minister Grylls explained "the redevelopment now provides easier access for visitors and allows for a more eco-friendly environment around the cave entrance."

With buildings removed, the new entrance allows natural filtration of water back into the cave, protecting threatened ecological communities known as stygofauna. New environmentally-friendly lighting which will illuminate the caverns is also being installed.

Minister Grylls congratulated the Augusta Margaret River Tourism Association for its vision to improve Western Australia's biggest show cave, stating "as well as the direct environmental benefits to the cave, the redevelopment creates a first rate experience for visitors.

"I am pleased $443,828 in grants from Royalties for Regions through the South West Development Commission has helped to make this redevelopment a reality."