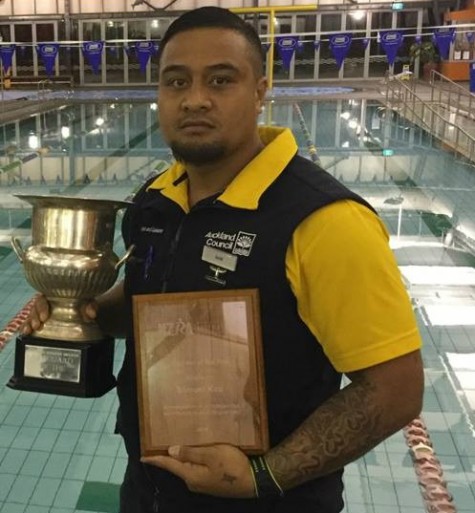 An Auckland lifeguard and a lifeguard team from Wellington have scooped up two of this year’s top New Zealand aquatics awards.

The third award, for innovation, went to the Lido Aquatic Centre in Palmerston home to New Zealand’s largest hydroslide and aqua play area.

The annual Aquatics Industry Awards are organised by the New Zealand Recreation Association (NZRA) to encourage development and recognition within the industry and were presented at the Association’s recent Just Add Water Seminar in Wellington.

NZRA Chief Executive Andrew Leslie said this year’s winners demonstrated the best of what New Zealand had to offer in terms of community and team spirit, as well as innovation, commenting “this year’s winners are inspiring examples of what can be achieved in aquatics by individuals and organisations, for the benefit of our communities.”

The Lifeguard of the Year award went to Samuel Kau from Auckland’s Otara Pool and Leisure Centre, who is described by his co-workers as a poster boy for the community. The award is given to the lifeguard who has made the most significant contribution to their facility and to the aquatics industry.

Leslie explained “Sam has gone the extra mile for his community. He is proactive in implementing fitness programmes at the centre where he works and in the wider Otara community, to encourage people to be more active.”

The Otara lifeguard is currently trialling a programme called the ‘Hydro fight’ at Otara Pool and Leisure Centre. The programme closely resembles BoxFit but is aimed at people who find it easier to exercise in the water than on dry land.

Wellington scooped up the New Zealand National Lifeguard Team award for the second year running, outranking its counterparts from Auckland, Nelson and Kapiti.

The Lifeguard Team of the Year award is presented to the champion of the Lifeguard Sports Competition, which took place at Freyberg Pool and Fitness Centre in Wellington earlier this week.

Leslie added “the Wellington lifeguard team has proved itself once again, and we commend them for their commitment.”

The Aquatic Innovation Award went to the outdoor hydroslides and aqua play area at the Lido Aquatic Centre in Palmerston North. News on this award will follow tomorrow.

The 2016 awards were presented last night at a Gala Awards Dinner at the Boatshed in Wellington.

In 2015, the Lifeguard of the Year Award went to Gore swim instructor Donna Burr for developing a unique programme of high intensity ‘Activ8’ aerobics classes – a hardcore class which puts participants through their paces.

Image: Samuel Kau of the Otara Pool and Leisure Centre with his NZRA awards.