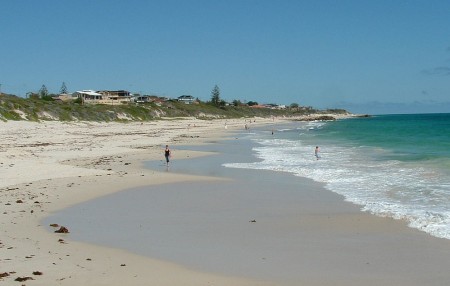 Wanneroo City Council has agreed to undertake a study into feasibility of an ocean pool as a possible long-term solutions to erosion at Quinns Beach.

The Wanneroo City Council agreed on August 18 to include the ocean pool option in a study currently being undertaken by geotechnical company Cardno.

Among a range of options being considered for the future of the beach, the Council has allocated an extra $60,000 to investigate the ocean pool option in addition to the $44,936 already budgeted.

Other options include shifting the existing headland, building a fourth groyne, upgrading the three existing groynes and creating an artificial headland in front of the carpark.

Community groups led by local resident Lewis Flood have campaigned for the construction of an ocean pool at the beach over several years.

These groups have previously favoured the building of a pool close to the Quinns Mindarie Surf Life Saving Club.

Locke told local media that he swam around the site and found that, apart from a few obstacles, the existing rock would suit a potential tidal pool.

He explained “at the south end of Quinns Beach, 150 metres from the main entry point of the surf club, it’s a rocky outcrop.

“It’s a natural groyne within rock; what we would do is extend the head of that and run it back to the beach.”