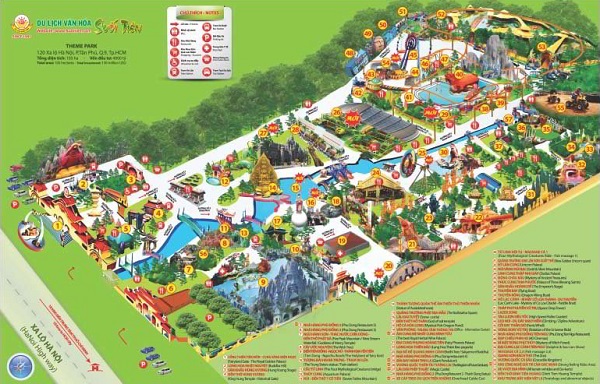 The project, which gained Government approval in 1999, will include a residential and commercial areas centred on a theme park with ecological and cultural attractions. The development, which is expected to cost US$1 billion, will begin operations by 2015.

Its first success was with the 55-hectare Suoi Tien Park, also in Ho Chi Minh City.

Tran My Duyen, Deputy Director of the group's business development department, said it estimated that it would invest US $1 billion for the second park in addition to $263 million needed for the group to expand the first park with an additional 55 hectares. The group also plans to develop a US$15 million cable-car route linking the two theme parks.

The Suoi Tien Group has attracted 40 million visitors over the last 15 years and their theme park is the most successful in the country.

Tran Kim Chung, Chairman of CT Group, thinks the theme park industry, which has grown 16% a year of late in major cities, is a promising sector in Vietnam, stating "there is a great deal of potential within the high-class segment of the market. Presently there are no modern theme parks that meet the demands of high income Vietnamese in the country."

Meanwhile, Thibault Paquin, principal at Celebrating Life Company, said Asia was expected to become the world's largest market for theme parks in the next 15 years, as the region accounts for 60% of the world's population.

Paquin highlights that Vietnam hasnât attracted big brands such Disneyland, Universal Studios and Legoland, rather is has developed its own local brands.

Pham Trung Luong, Deputy Director of Vietnam's Institute for Tourism Development Research, recognises that theme park development is a tool with which a country can develop tourism pointing out that the Vietnamese Government supports this kind of development as a move to diversify and enrich the country's tourism industry.

However, Luong laments that foreign investors are not excited at the prospect of joining the industry.

Shah explained that "investors should plan small-scale and modernised parks and expand them later when the industry matures."

Loung adds that "foreign firms seem to be more interested in hotels and resorts with electronic games or casinos serving as entertainment. It appears that they are not interested in investing huge amounts of capital in theme parks."

Vietnam has a population of over 86 million which will reach 100 million by 2020. This will lead to a potential market where parks can meet localsâ amusement needs and demands, said experts in the industry.

However, the demand would not be strong enough as a large percentage of the population is on low incomes and cannot afford the relatively expensive theme park tickets.

Authorities in Ba Ria-Vung Tau Province are considering revoking a license that they granted to US-based Good Choice in 2008 to develop a $1.3 billion theme park called Wonderful World in the coastal province. The authorities said that the developer has yet to implement the project.

The country has already witnessed theme park project failures, namely Vietnam Water World and Saigon Water Park, from foreign investors due to low local demand. Investors suspended operations for years while they asked for approval from the local government to adjust their projects.
Thanh Nien