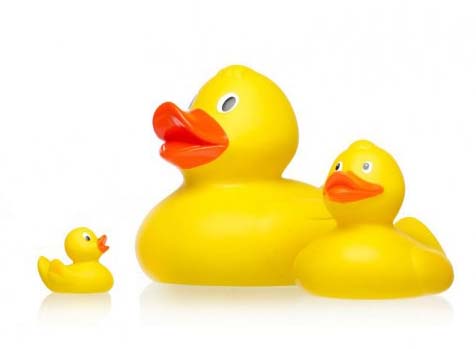 Families of plastic ducks are being used to remind Victorian parents about the need to be water-wise with small children.

From 1st July 2014, maternal and childcare nurses across Victoria will be distributing a family of yellow toy ducks to parents at their child’s 12-month check up.

Announcing the initiative, Victorian Minister for Police and Emergency Services Kim Wells stated “parents will receive information about the importance of water safety from their maternal health nurse along with the toy ducks to reinforce and remind them of the dangers.

“As a group, children under four have the second-highest age-specific fatal drowning rate.

“According to Life Saving Victoria, 31 children under four drowned in Australia during 2012-13 and three of them were in Victoria.

“While that figure is relatively small given Victoria’s population, any death is one too many and no parent or family should have to deal with that kind of tragedy.”

In making the announcement that, as part of the ‘Play It Safe By The Water’ campaign, nurses would give 30,000 children a family of ducks they could play with in the bath, Minister Wells was joined by representatives from Life Saving Victoria, Kidsafe and Channel Nine reporter and new mother Alicia Loxley to launch the initiative.

Loxley said the campaign was an important initiative, stating “as a new mum I’m thrilled to be supporting the duck family project

“I’m now all too aware you can’t take your eyes off little ones for a second and that is particularly true around water. If this campaign can prevent just one drowning tragedy, then it will be a success.”

Since 1998, ‘Play It Safe By The Water’ has helped reduce the number of drowning incidents in Victoria and increased awareness of water safety in the Victorian community.

Minister Wells continued “water safety is not just a campaign for summer; the hazards are with us all year.

“Toddlers are among the most vulnerable people in the community (they) have a natural fascination with water, but it can be deadly. Baths, garden ponds, swimming pools, creeks, rivers, farm dams, lakes, even buckets and pet bowls pose hazards.”

Minister Wells said that for every drowning death involving a child aged under four, there were another 10 non-fatal incidents, many of which resulted in a child receiving permanent brain damage.

He concluded, “the ... Government continues to work with Kidsafe Victoria and Life Saving Victoria to promote the message to all Victorians.

“We want to reduce the sad toll of kids drowning

“It takes just 20 seconds for a toddler to drown but constant vigilance can prevent such a devastating outcome.”