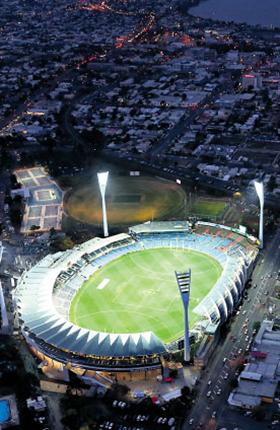 The $75 million upgrade, which aims to create Australia’s top regional sport and events venue, will see the former Cardinia Park’s capacity rise to 36,000.

The redevelopment, designed by global sports architects Populous, will also a new rehabilitation centre for the Cats, combined with a community medical clinic.

An agreement between the Victorian Government and the City of Greater Geelong will also see the Kardinia Park Trust take control of Simonds Stadium while leaving the surrounding sports ovals, swimming pool, netball courts and parkland under council management.

This management is expected to start as of the 2016/17 financial year.

Commenting on the upgrade, Minister Eren stated “Simonds Stadium is at the heart of sport in Geelong and is a treasured part of this great city.

“We’re upgrading it, so that it can offer world-class facilities and attract the best events.

“The big AFL games are just the start. Twenty20 Cricket, A-League blockbusters and many more events will head the way of Geelong when this upgrade is complete.”