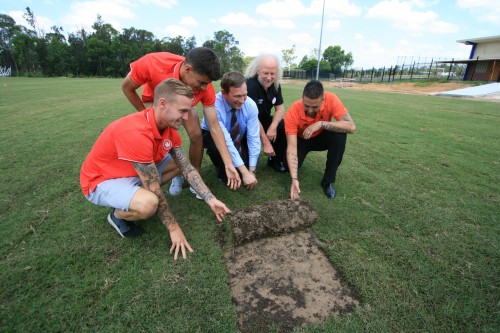 The development of the Blacktown Football Park in Western Sydney has this week seen turf laid on three newly constructed first class fields.

Blacktown City Mayor Stephen Bali was joined by representatives from Blacktown District Soccer Football Association and Western Sydney Wanderers FC players to ‘roll out’ the turf on the fields.

Blacktown and Districts Soccer Football Association Chief Executive Officer Jack Taylor is excited about what the new fields will mean for the 22 clubs and 10,300 players registered with the Association.

Taylor explained “the construction of these three new high quality playing surfaces is a major boost for football in Western Sydney.

“With these new fields, Blacktown Football Park can host Spartans National Premier League home games across all divisions and major state football competitions. This provides a clear pathway for the football stars of the future right here in Blacktown.”

Building pathways from grassroots to elite football has been at the forefront in planning of the project that will see Blacktown as the unrivalled base for football in the State.

Blacktown City Council has worked in partnership with the Western Sydney Wanderers FC to create a state of the art training complex in Blacktown. The Wanderers club has been based at Blacktown International Sportspark Sydney since they joined the A-League competition four seasons ago and is making the Sportspark their permanent training and administration headquarters.

The current Phase 2 construction phase is expected to be completed in mid-2016.