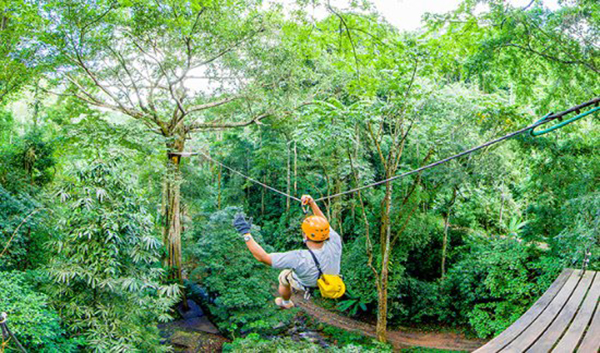 A Canadian tourist has died in Thailand after falling from a popular zipline attraction at Chiang Mai in the mountainous northern region of the country.

As reported by the Bangkok Post, the man was identified as Spencer Charles, aged 25, who died while experiencing the attraction operated by the Flight of the Gibbon Co.

Initial reports said that shortly after Charles, who weighed about 125 kilograms, was released from the start of the zipline, the cable disconnected and he plunged about 100 metres to the creek below.

District administrator Suthep Saenmongkol, said an investigation was underway to establish the actual cause of the accident advising that the zipline operator had accepted full responsibility for what happened.

Investigations against the zipline operator are now being handled by Thailand Tourist Police and the Tourism and Sports Directorate in Chiang Mai.

Pol Maj Sakarin Wiratkasem, a Mae-on Police investigator, had informed the Canadian Consulate in Chiang Mai of the accident who contacted Charles's relatives.

A spokeswoman for Global Affairs Canada has confirmed the Canadian's death, but declined to give further details for privacy reasons.

According to the Bangkok Post, serious injuries have occurred previously at the zipline, operated by Flight of the Gibbon Co.

In September 2016, three Israeli tourists were injured in a fall. In December that year, the Huay Kaew Tambon Administration Organisation (TAO) issued an order for the company to suspend its service indefinitely for safety checks and reported it to the Chiang Mai Governor.

Image shows the Flight of the Gibbon zipline. Image used for illustrative purposes only.