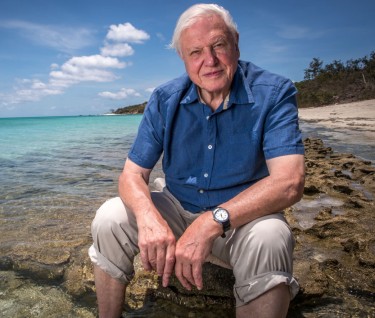 Aimed at inspiring greater interest and more visits to the world’s largest coral reef system, the three-part documentary series will form a key part of a renewed push by Tourism Australia to promote Australia’s aquatic and coastal experiences.

Contributing $1.5 million into the venture with Atlantic Productions, the Tourism Australia backed project will see Sir David return to the Reef nearly 60 years after his first visit.

Expected to air early in 2016 and anticipated to be distributed across more than 130 countries, Tourims Australia will back the project with further funds to support international marketing once the series airs.

O’Sullivan explained “the Great Barrier Reef is a huge part of our destination appeal, with consumers in the UK, US, Singapore and Japan actually ranking it as their number one most appealing Australian attraction.

“It’s vital we continue to show the world why our aquatic and coastal experiences are so unique, and this film will undoubtedly help tell that story to a truly global audience about the beauty and importance of the Great Barrier Reef, and ultimately inspire more visits.”

Sir David spent three weeks on the Reef as part of the filming schedule, including time aboard one of the world's most advanced research vessels equipped with the latest cutting-edge technology.

Commenting on Sir David's appeal, O’Sullivan added “David Attenborough is one of the world’s greatest presenters of natural history content, and the Great Barrier Reef is arguably the world’s most recognised natural wonder.

"We couldn’t ask for a better match."

Sir David Attenborough said returning to the Reef with the latest technology and science provided an exciting opportunity to see one of the most important places on earth in a whole new way.

The added "the most exciting natural history experience of my life was the first time I dived on a coral reef (in 1957).

"Being on the reef is a revelatory, thrilling and unbeatable experience and with this project we’re going to be able to share it with millions."

O’Sullivan said the Great Barrier Reef remains one of Australia’s strongest tourism draw cards, attracting more than 1.9 million visitors each year and with 90% of the direct economic contribution in the region derived from tourism.

O’Sullivan concluded "we already know from our consumer research that Australia’s biggest competitive strength is its world class nature, something which is extremely highly regarded from all our key target markets and very much a core part of our global tourism offering."

Tourism Australia is developing plans to translate the global exposure into more visits by utilising the unique video, digital, print and PR assets generated by the project.