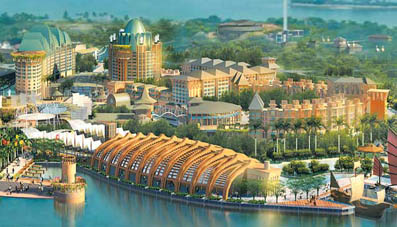 Universal Studios Singapore and the Singapore Zoo have been hit by ticketing scams in recent weeks.

Resorts World Sentosa (RWS), operators of the Universal Studios Singapore theme park, has been alerted to large numbers of tickets, sold through a ticket agency, as having been bought using a stolen credit card.

Shin Min Daily reported that a person claiming to be a Vietnamese distributor sold the tickets to a tour agency, which were then found to be invalid for use.

According to the Chinese daily, the tour agency owner said he had bought 100 tickets at $55 each, and had sold them off at $60. The normal price of tickets is $68.

RWS advised travel agencies to purchase tickets directly from them, as they are guaranteed to be valid and bona fide.

In another scam, Singaporeans have received telephones call advising that they have won free admission to the Singapore Zoo.

To receive their tickets, the victims were requested to reveal their IC numbers over the phone in exchange for 'free zoo tickets'. Those who did and arrived at the Zoo found that the tickets they had 'won' did not exist and that the person who called them did not work for the zoo.

In a statement, Wildlife Reserves Singapore (WRS), which runs the Zoo, confirmed that it has uncovered a recent spate of phone scams.

WRS Director of Marketing and Communications Isabel Cheng advised members of the public to make a police report if they receive such calls.

The scam came to light after the Singapore Zoo received several inquiries, in person and over the phone, about the free tickets.

WRS confirmed that several people fell for the scam. It added that some people reported the scam to the zoo as they found it odd that the call came from a private number. WRS said it has lodged a police report.

In the scam, members of the public were told over the phone that they have won tickets to the Singapore Zoo, which include entry to a 'food festival'.

No such event was organised, said WRS.

In the same phone call, potential victims were told to go to the zoo's visitor centre on a specified day and time to collect the tickets.

The caller then asked for each individual's name and IC number.

The Singapore Zoo has posted a message on its website to warn the public about the scam. It advised the public not to divulge personal information to such callers.