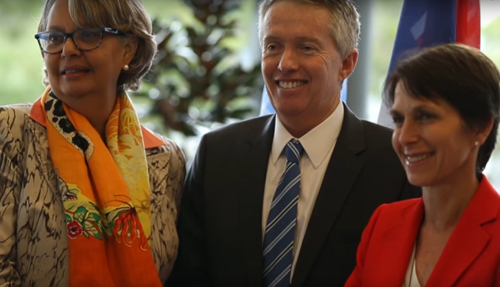 In a joint effort to promote gender equality, Tennis Australia and the UN Women National Committee (NC) Australia have announced the co-hosting of a breakfast event to mark International Women’s Day on Wednesday 8th March.

Welcoming the new partnership, Tennis Australia Chief Executive Craig Tiley stated “as a sport we have much to be proud of in the area of gender equality.

“We award equal prize money regardless of sex.

“However, there is still more that we can do and as an organisation we are committed to using our position as the host of a global sporting and entertainment event, the Australian Open, to celebrate and promote the cause of gender equality on an international level.”

At the breakfast event, expected to be attended by leaders from across the Australian community, Tiley will deliver a welcome address while Australia’s newly appointed Ambassador for Women and Girls, Dr Sharman Stone will present and Kate Jenkins, Australia’s Sex Discrimination Commissioner will join a panel of extraordinary international speakers from UN Women in Pakistan and Fiji.

“We consciously collaborate with companies, government departments, universities and sporting organisations who demonstrate a commitment to accelerating gender equality in their workforce and everyday practices.

“We are proud to partner with Tennis Australia who is taking a lead role convening conversations for sporting organisations and the private sector to advance opportunities for women and girls.” said Ms Weissman.

UN Women is dedicated to gender equality and the empowerment of women. A global champion for women and girls, UN Women was established to accelerate progress on meeting their rights worldwide.

UN Women National Committee Australia is the Australian fundraising and advocacy arm of the United Nations agency for gender equality.

For more information on the International Women’s Day Breakfast go to www.unwomen.org.au/take-action/events/melbourne-iwd-breakfast