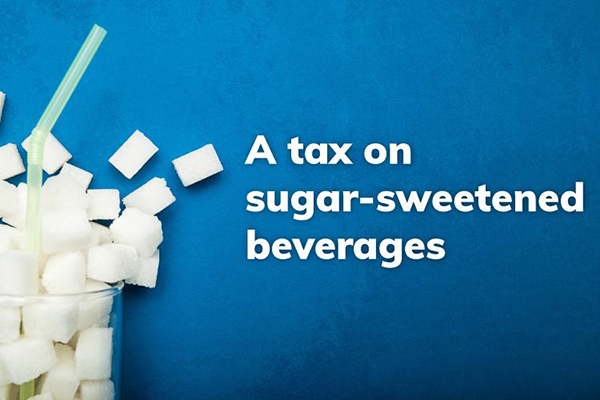 Modelling conducted by the Australian Medical Association on the effects of taxing sugar-sweetened beverages, indicates a reduction in sugar consumption and hence reduced rates of obesity.

Sugar-sweetened beverages (SSBs) are a major contributor to the obesity crisis in Australia and provide almost no nutritional benefit. Australian Medical Association (AMA) modelling indicates a tax on selected SSBs would reduce sugar consumption from soft drinks by 12 to 18% (27,596 to 43,804 tonnes of sugar) and raise annual government revenue of $749 million to $814 million.

In this report it is suggested to tax a subset of SSBs — all non-alcoholic drinks containing free sugars, excluding 100% fruit juice, milk-based and cordial drinks. The focus is on drinks that provide no nutritional benefit.

The AMA estimates that if no action is taken to stem the obesity crisis, by 2025 taxpayers will have footed a further $29.5 billion (over four years) for the direct healthcare costs of obesity.

A systematic review of worldwide costing studies estimated that people living with obesity have medical costs that are approximately 30% greater than their healthy weight peers.

The AMA wants to see steps taken towards reducing obesity because it is a major risk factor for a range of chronic and preventable conditions including type 2 diabetes, heart disease, stroke and cancer.

How a tax on SSBs would work

The benefits of an SSB tax are threefold: it would introduce a price signal to consumers that the product is unhealthy; create a disincentive in the form of higher prices; and incentivise manufacturers to reformulate (i.e. lower the sugar content of products). An added bonus is that it would raise government revenue which could be spent on further initiatives to tackle obesity.

The tax that has been modelled is a specific excise tax based on sugar content, set at $0.40 per 100 grams of sugar (per unit of product). This tax rate was chosen with the World Health Organization’s recommendation in mind – that a tax on SSBs would need to raise the retail price by at least 20% in order to have a meaningful health effect. The tax rate of $0.40/100g sugar would raise the retail price of the average supermarket SSB by 20%.  Under the proposed tax rate, the amount of tax paid on a 375ml can of coke with 40g sugar (sugar content is 10.6g/100ml) would be $0.16.

Impact of the tax

More than 45 jurisdictions across the world have implemented SSB taxes. There has been confirmed success already in a number of countries, including the United Kingdom (2018), Mexico (2014), France (2012), Chile (2014), Catalonia, Spain (2016), and in some US jurisdictions (Portland 1991; Cleveland 2003; Berkeley 2015), where robust evaluations have shown a drop in consumption following the tax. The report includes case studies of SSB taxes in the UK and Mexico on pages 11 and 12, with the UK tax very similar in design to the proposed Australian tax.

A tax on SSBs would be an important first step towards tackling obesity and would raise revenue to take further steps. Revenue should be earmarked for preventive health measures such as awareness and education initiatives to improve health literacy around diet and nutrition.

For the majority of the population, there is an affordable alternative to SSBs in the form of tap water, and part of the intent of an SSB tax would be to move consumers towards this untaxed, healthy substitute. This means that any barriers to safe water access also require action. Therefore, revenue should also be used to ensure all Australians have reliable access to a clean, safe water supply.

Australian surveys have consistently shown majority support for a tax on SSBs. Public support is even higher if tax revenue is hypothecated to fund initiatives to tackle obesity. A nationally representative survey undertaken in 2017 found 60% of Australians support a tax on sugary drinks. This increased to 77% support if the proceeds were used to fund obesity prevention.