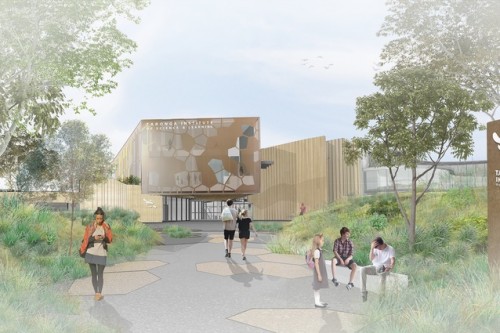 Construction of Taronga Zoo’s new global centre for conservation science and learning for researchers, students and visitors will proceed after the NSW Department of Planning and Environment signed off on the development.

The $30.7 million Taronga Institute of Science and Learning (TISL) will allow Taronga to build on its current world-leading education and research programs.

Designed by NBRS architects, the design of the new three-storey is inspired by patterns in nature and will be built to an environmentally sensitive design that allows the building to step down the site, retaining a similar height to the Zoo’s existing Education Centre.

The plans were publicly exhibited in January and February 2016 and construction work is scheduled to start next month.

When completed in early 2018, TISL will support a range of learning programs for students from kindergarten to PhD level as well as the public, and provide facilities including:

• Technology laboratories for the study of animal welfare and conservation science
• Facilities to support in-house and partner organisations working on the ground
• Themed immersive classrooms for school children offering an immersive and interactive experience.

The project, which is part of the Zoo’s Centenary Revitalisation Plan, will see the Zoo’s existing education facility demolished.

Commenting on the development, NSW Environment Minister Mark Speakman said the Institute would work with more than 10 universities across a range of scientific disciplines.

Minister Speakman also explained that “the Institute will enable Taronga to expand on its strengths in science and education, increase the Zoo’s ability to undertake leading research and inspire individuals and communities to secure a future for wildlife.”

Image: An artist's impression of the entrance to the Taronga Institute of Science and Learning.