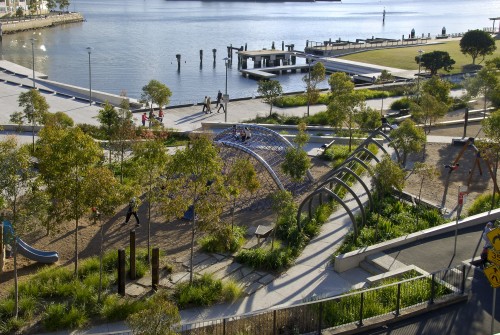 The City of Sydney has officially opened Pirrama, its new $37.1 million harbourside park.

As Sydney Lord Mayor Clover Moore MP explains, "the vision for the conversion of the former Water Police site into a stunning four hectare park - dates back more than six years."

Marked for housing development, the Friends of Pyrmont, led by City Councillor Marcelle Hoff, argued that the area be retained as open space. Development on the site was held off by a 'green ban' by the Construction, Forestry, Mining and Energy Union (CFMEU) until after the 2004 Sydney City Council election when the incoming Independent Team moved that Council purchase it from the Sydney Harbour Foreshore Authority.

"What is particularly gratifying and exciting is the new 850 metre segment of boardwalk this project has added to our planned 14 kilometre foreshore walk along Sydney Harbour."

Mayor Moore said the naming of the park recognised the First Australians, who called the area Pirrama.

"The name is recorded in maps and journals of First Fleet naval officers who documented Sydney Harbour and is one of the few traditional Indigenous names directly attributed to a particular locality in our area.

"Sandstone artefacts in the interactive playground reflect former quarries and the promenade marks the original shoreline.

"The boardwalk within the park is named 'Stevedore Walk' to commemorate Pyrmont's maritime workers and industries."