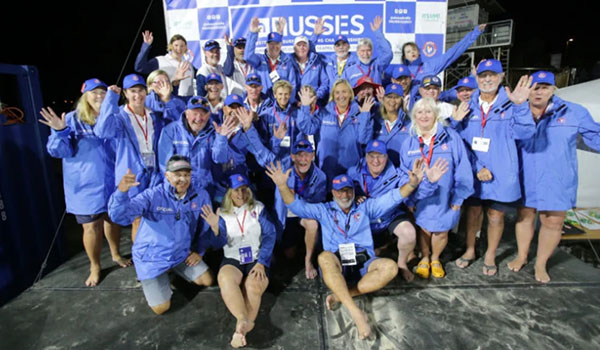 Following Surf Life Saving Australia having initiated its Officials scholarship and pathway in 2021, four officials from around Australia were carefully selected and given the opportunity to develop their surf sport officiating knowledge at the 2021 Australian Surf life Saving Championships on the Sunshine Coast.

‘The Aussies’ is an annual event where members from Australia’s 315 Surf Clubs come together to compete in more than 480 beach and ocean events. It is the largest event of its kind, only comparing the likes of the Commonwealth Games.

The scholarship was initiated in recognition of the vital role officials play in Surf Life Saving Sports at every level whether it be Club, Branch, State or National and in an effort to continue to maintain the high officiating standards.

Current Officials who had never volunteered at ‘The Aussies’ previously, were invited to apply for the inaugural scholarship, stating their previous experience, the desire to learn from the best and their passion to keep developing their officiating skills within the movement.

The program provided these four officials with the opportunity to be mentored by experienced officials for the durations of ‘The Aussies’. They were able to gain invaluable insight into major carnival structures and processes and were able to network and form friendships with other officials from across the country.

National Officials Advisor Paul Kenny said that officials are volunteers who willingly give their time and expertise to ensure that to the best of their ability, a safe and fair environment is provided for all SLSA members to compete in.

Kenny notes “officials come from a wide range of areas within our movement to assist in the conduct of our events and the expertise required to conduct an Australian Championship events can be as varied as knowledge of First Aid, manning powercraft rescue boats, administration, the intricacies of Rescue & Resuscitation (R&R) and surf board riding, judging, starting, refereeing events that happen in the water and others that are conducted on the beach.

“Most officials are long time members of the organisation and greatly enjoy being part of ‘the team’ that conducts the Championships.  The camaraderie and mateship they develop working with like-minded lifesavers help carry them through long and arduous days in the sun on the beach or on the water and provide a great sense of achievement when the championships have concluded.”

New South Wales Leanne Hatherly from Port Macquarie said she was thrilled to be a recipient of the inaugural scholarship and despite some initial nerves knew it was an opportunity not to be missed.

Hatherly adds “It was the ‘push’ I needed to take the next step outside of my comfort zone and gain experience that you cannot get at a local carnival.

“From the beginning I was made to feel welcome both on and off the beach.  Our mentors (and other officials on the beach) were generous in sharing their knowledge and the Senior Official facilitators ensured we were given the opportunities to try out different areas of interest while providing very valuable feedback.

“I would highly recommend other members to apply.  It is a daunting step to go to the next level officiating at a National carnival and with this Mentoring scholarship it takes away some of the unknown and you can be confident you’re being looked after.”

Victoria’s Philip Mawkes from Hampton LSC said that the entire experience was great and the learnings last well beyond just the nine days of competition.

“I felt completely supported from start to finish and the experience of being an SLSA official scholarship recipient in 2021 was fantastic.

“Working with other officials from around Australia gave me a lot of confidence in my knowledge of the 36th edition of the Surf Sports Manual, and that each state and territory has their own challenges and different ways to solve these.

“I would 100% recommend the SLSA officials scholarship to any other official who is keen to broaden their knowledge in a supportive environment. It provides connections with others that will provide benefits well beyond just the nine days of Aussies.”

Elise McCorriston from Venus Bay in Victoria saw the benefits of officiating at a National level as it enabled her to form connections with Officials from around the country and gain ideas from other States.

“We compared what we did in our respective States and areas within our States. Hearing about how events are conducted and differences prompted me to think about what could be brought to my State and Club to improve events.

“I spoke to as many Officials in my areas as possible as well as outside the event. Even if they weren’t one of my mentors, I found that they were all more than willing to help explain their roles and provide guidance.”

The Aussies Officials Scholarship will increase the opportunities and create progressive pathways for aspiring officials, to develop their skills and gain a breadth of knowledge at a national level.