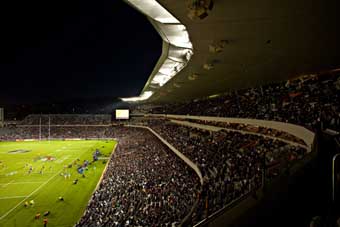 Poor quality mobile connectivity at major stadia and arenas is "one of the biggest issues facing the venues industry" according to AEG Ogden Group Director - Arenas Tim Worton.

Worton added that at major sport and entertainment events "people want to post their experiences, their photos via Facebook and other social media but overloaded wireless technology means they just can't."

Worton was among a panel of global venue leaders addressing how sporting venues are competing with home broadcasts for viewers and crowds, with the push by stadium managers push for high-speed mobile connectivity emerging as a global issue.

In the USA, National Football League Commissioner Roger Goodell wants every NFL stadium to be equipped with efficient Wi-Fi networks to handle the the tens of thousands of mobile devices and their fans that flood into the venues throughout the season.

Goodell recently told NBC Sports "we believe it is important to get technology into our stadiums.

"awfully inept" to fans, with Goodell adding "the initiative is to get Wi-Fi in all our stadiums for mobile devices. We want to make sure that our fans, when they come into our stadiums, don't have to shut down.

"When you come to our stadium we want to make it a great experience."

Speaking at the conference this morning, Sporting Kansas City Chief Information Officer Asim Pasha stated "we are getting to a point where fans will not turn up if no connectivity", adding "every stadium must have a network."

Addressing the issue in a feature on 'Wireless Venues' in the March/April 2012 issue of Australasian Leisure Management, Brett Liddle, General Manager - Venue & IP Surveillance Solutions at Victorian-based services provider Southern Cross Computer Systems, wrote "many traditional Wi-Fi vendors are struggling to meet the needs of high density environments as their technology approach has been based on occasional, low density wireless usage, as opposed to the high densities being experienced today.

"There are two significant flaws to this traditional approach. Firstly, the technology does not control the behaviour of wireless clients (such as when the clients can transmit or receive data, and when they hand over between access points). As such, access points cannot support high client densities, because as more users are added to an access point, data throughput drops dramatically as users try to communicate simultaneously and waste bandwidth with multiple collisions and retries (like a classroom where all students are allowed to talk at once).

"With limited client capacity per access point, the only way that the vendors can provide sufficient capacity in a high density environment is to increase the number of access points and decrease access point power to avoid co-channel interference, resulting in less coverage. The result of this vicious circle is increased costs from the need for additional access points, plus the extensive costs associated with channel planning. "

Among business solutions for the problem, Cisco Connected Stadium Wi-Fi, is a high density Wi-Fi solution for venues offering a turn-key combination of Cisco's leading wireless technologies, specialised software and professional services optimized for stadiums and arenas where large crowds are gathered.

Cisco delivered what it described as "digital makeover" for Auckland's Eden Park during the 2011 Rugby World Cup - pictured.

For more information on Sport is Fantastic go to www.sportisfantastic.com