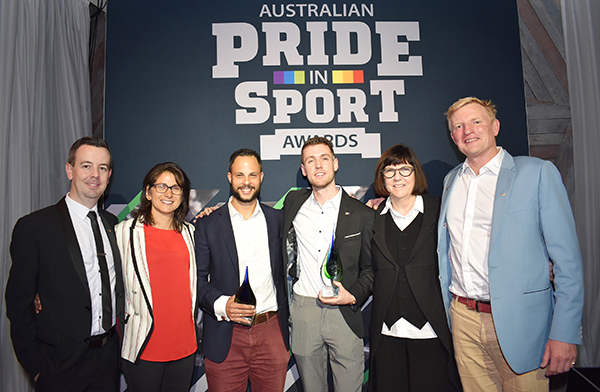 Three individuals across various sporting codes were awarded for their efforts in making their respective sports more inclusive of LGBTQ people on and off the field, with three community awards also being handed out.

The awards showcase the results of the Pride in Sport Index (PSI) - a national benchmarking instrument used to asses LGBTQ inclusion within Australian sport.

ACON Vice-President and co-founder of the PSI, Andrew Purchas stated "despite significant recent gains in equality and law reform, the past year has shown that struggles continue to persist for LGBTQ people in Australia, including within the sporting sector.

“These awards and the index continue to highlight the important inclusion work being done by many within Australian sport, as they provide sporting organisations and figures with an opportunity to reflect on their work in the inclusion of LGBTQ participants and staff, and identify areas they can address to ensure their sport is truly inclusive.

“Many of Australia’s sporting organisations are taking the positive steps needed to be taken to ensure your sexuality, gender identity and experience does not impact your ability to play, watch or be involved with sport at any level.

“I congratulate all the award recipients and the many others working towards making Australian sport an inclusive place for everyone and I’m proud to celebrate those success stories at the Pride in Sport Awards today."

This year’s PSI results saw a 61% increase in index submissions, highlighting the focus sporting entities are beginning to put on LGBTQ inclusion within various codes. In addition, award nominations from the wider community also rose by 70%, indicating that a far greater portion of the sporting community are achieving positive outcomes when they develop initiatives for inclusion at a grassroots level.

Program Manager for Pride in Sport Beau Newell added "since 2016, the Pride in Sport Index has continued to see a significant shift in practice with LGBTQ inclusion work in Australian sport. With a wide range of sporting organisations participating, we are seeing more and more commitments to providing safer and more inclusive environments and experiences for LGBTQ people.

“While inclusion has well and truly made its way onto the Australian workplace diversity and inclusion agenda, there is more to be done to ensure that sport in Australia can experience greater levels of LGBTQ inclusion.

“I would like to congratulate each sport and the many volunteers on the efforts they are making to ensure everyone is welcome both on and off the sporting field."

For more information, go to the Pride in Sport website at www.prideinclusionprograms.com.au/psi/