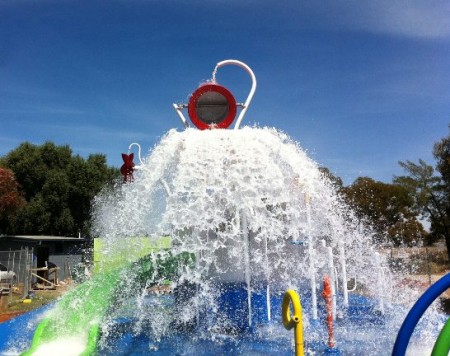 Situated on the banks of the Murray River, 330 kilometres north west of Melbourne, this family owned and operated Big4 Holiday Park has been a finalist in the 2009 & 2008 Tourism Victoria Awards, and is the most recent winner of the Swan Hill Business Excellence Award for Tourism.

Designed and constructed by Vortex Aquatic Playgrounds, the 275 metre2 Splashpad features a large 250 litre tipping bucket with deflector for maximum splash, waterslides, interactive water cannons and a water tunnel as well as whimsical play elements such as frogs, water jellies, turtles and mists.

Acting as another playzone for guests of the holiday park, as well as being open to the public via a 'pay-for-play' scheme, the Splashpadwill allow visitors and locals alike to enjoy the water in a safe environment.

A zero-depth facility, the Splashpad has designated areas for toddlers, children and teenagers, thus allowing the entire family to enjoy the Splashpad together.

Vortex Aquatic Playgrounds executive Ron Swaab explained "it's been an absolute pleasure working with Dianne, Dennis, Clare and Heath from Big4 Swan Hill. Their input was critical in the final design of the Splashpad, and the result will be spectacular. And from feedback from members of the community impatiently awaiting opening day, it's going to become the best spot in town to cool down with the family."

The Splashpad is set for its official opening day on Friday 9th November 2012.

For more information click here to contact Playrope via their entry in the Australasian Leisure Management Supplier Directory.