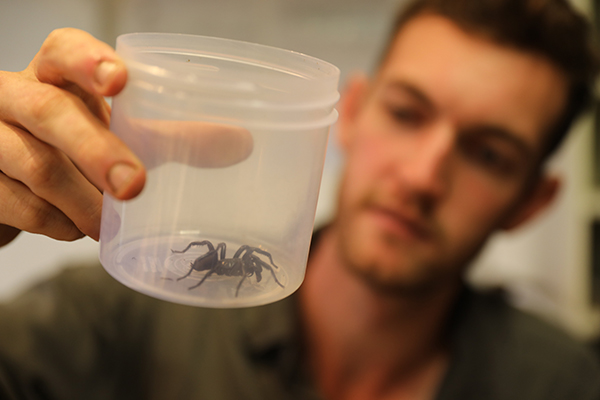 The Australian Reptile Park has announced that Keeper Jake Meney, a Reptile and Spider keeper at the Central Coast wildlife sanctuary, has successfully beaten the venom record from milking funnel-web spiders.

The title was previously held by curator Liz Vella and has retained the title for over five years until the latest results showed Meney had become the new victor. Measuring at 0.30mg average per spider milking in comparison to 0.27mg - the previous record.

Although seemingly minuscule a difference, these minute amounts are enough to kill an entire room full of people. Since the introduction of the Australian Reptile Park’s anti-venom program in 1981, there has been zero fatalities due to a funnel-web spider bite. This is thanks to the keepers working tirelessly every day to ensure each spider is being milked correctly to savour every last precious venom drop.

The Reptile Park is calling Meney a real life ‘superhero’ to coincide with their 'Zooperhero' school holiday promotion.

Commenting on his new record, Meney explained “we do try to make a bit of a competitive game out of it – it makes us keepers work a little bit harder to reach that goal and we’re so proud to say that all of the venom is going straight into saving the lives of the Australian public.”

Australian Reptile Park General Manager Tim Faulkner added "Jake’s record break is an extremely exciting moment for the keepers here, but we can’t wait to see the day where we can potentially get double that in a year.

“We rely heavily on the public handing in funnel-web spiders and would not be able to help save lives if it weren’t for their generous donations. We are in an off season at the moment, but funnel-webs are still around.”

The Australian Reptile Park is the only place in Australia that milks funnel web spider venom to make into antivenom. Before the antivenom was developed 38 years ago, there were 13 recorded deaths in NSW by funnel webs, but there have been zero fatalities since the development of the antivenom in 1981.

The Australian Reptile Park will be celebrating its 'Zooperheroes' School Holidays event from 13th to 28th April 2019 with a daily Superhero Stunt Show at 1.30pm.

The Central Coast wildlife sanctuary is an immersive and interactive experience located the natural bush setting of the Central Coast of NSW, only 60 minutes from Sydney or Newcastle.