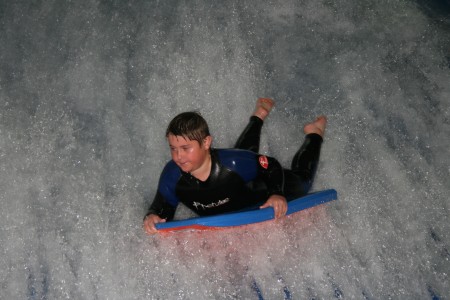 The $10.5 million upgrade and redevelopment currently underway at the South Hedland Aquatic Centre is set to transform the facility into a state-of-the-art aquatic facility and waterpark.

The Centre is being updated with additional pools including a 'Learn to Swim' pool, a new water treatment plant, disabled access, heating to enable year-round use, an aqua tower and Australia's first installation of a LatiTube standing surf wave simulator.

Unlike other wave simulators, the Latitube pumps water over a flexible 20mm mat known as 'the curtain ride surface', which is similar in feel to a backyard trampoline.

Harnessing the energy of a 50,000-litre water pump, the prototype can change the shape and the type of wave the operator wants to ride.

Electronic settings can throw up left and right-handed barrels and pits ranging from 1.5 to 3 metres high while the boardrider floats on water pumped through jets from a large water tank.

Earthworks are currently being undertaken on-site to prepare for the arrival and installation of the Latitube.

The upgrades are being supported by the Western Australian Government's Royalties for Regions program ($3.6 million), BHP Billiton Iron Ore ($4.05 million), the WA Department of Sport and Recreation ($600,000), the Town of Port Hedland ($600,000) and the Federal Regional Local Government Infrastructure Program ($150,000).

The project has been in planning and design stages since mid-2010 with the final masterplan adopted by the Town of Port Hedland council in late 2011.

The 'old' South Hedland Aquatic Centre closed its doors in January with works commencing on site in February this year.

BHP Billiton Iron Ore Senior Manager Community and Indigenous Affairs Chris Cottier explains "we're excited to be a part of the Aquatic Centre re-vamp, and to deliver the state-of-the-art Latitube.

"It's something totally unique to the North West and I know a lot of local kids will be counting down until the time they can test it out."

Currently progressing on schedule and within budget, the project is expected to be completed by October this year.