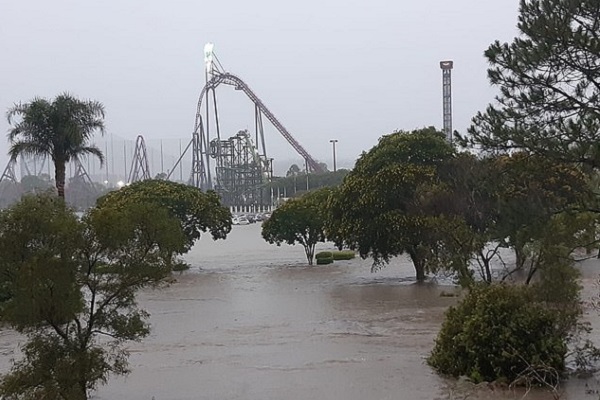 Breaking the lengthy dry spell, Loders Creek on the Gold Coast recorded 325mm of rain falling while more than 200mm of rain was recorded in the hinterland

With the Bureau of Meteorology reporting that triple the monthly rainfall had fallen on the Gold Coast over 12 hours, floodwater closed the M1 at Helensvale and the nearby theme parks.

As of 10am, Dreamworld advised “Dreamworld and WhiteWater World will be closed today, 18 January due to inclement weather. The safety of our guests and team is our first priority. We appreciate your patience and apologise for any inconvenience caused.”

At the same time, Movie World’s Facebook page advised “please be aware that due to severe weather and flooding, Warner Bros. Movie World will be closed today for the safety of our guests and team members. Keep an eye on our website for any updates. We apologise for any inconvenience caused.”

In NSW, the onset of rain over the state has helped the firefighters put out 49 fires since last Saturday when there were 124 major fires burning in the drought-ravaged state of which 47 were out of control.

Heavy rain on Friday caused the Australian Reptile Park on the NSW Central Coast to close for the day as a result of the huge deluge.

In the past week Village Roadshow Theme Parks is reported to have called on the Queensland Government to set a mid-year deadline to organise potential commercial land opportunities on The Spit, the site of its Sea World attraction, in a bid to fast-track investments.

The push to resolve land deals is outlined in submissions by operators and tourism leaders to a Queensland Parliamentary committee preparing a report on the Spit Master Plan legislation.