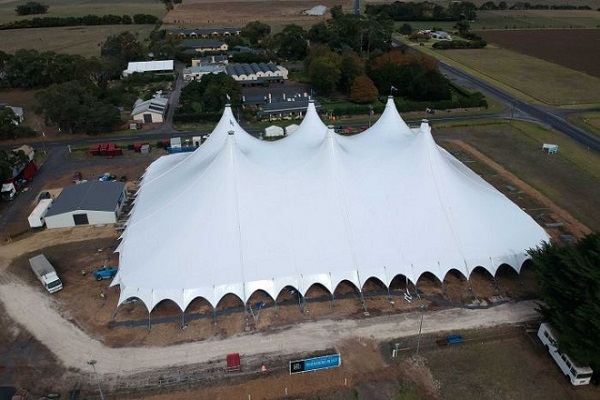 A paddock in regional South Australia is the location for the world’s largest modular big-top tent, which has been set up for Mount Gambier's Generations in Jazz festival.

Accommodating up to 11,000 people, the tent has been set up for the more than 10,000 people expected to attend the jazz festival from 3rd to 5th May.

At 64 metres by 84 metres with six king poles reaching up to 25 metres in height, the tent and seating structure requires a crew of up to 18 to assemble it over a few days.

“We’ve brought the largest seating capacity ever under a big top and it’s here in Mount Gambier.”

Gasser designs, builds and packs down tents around Australia - many for major music festivals like Groovin' the Moo - but he said the special design for Generations in Jazz was the largest modular tent he had ever built.

He advises "for South Australia it's very unusual.

"We've brought the largest seating capacity ever under a big top and it's here in Mount Gambier."

The big top tent was designed especially with the Generations in Jazz Festival in mind.

Gasser added "Generations in Jazz is a passion, I love it, my team loves it, they needed more space."

During the three-day festival, thousands of students and jazz lovers descend on Mt Gambier for school band and vocal competitions and concerts.