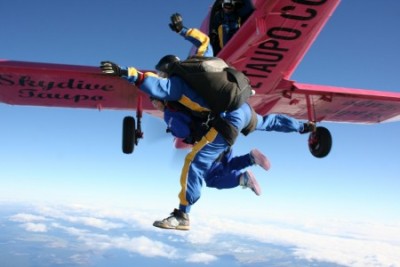 13 people on a skydiving plane that encountered engine trouble have parachuted to safety moments before the aircraft plunged into a lake.

The plane, which was filled with instructors and divers heading for a tandem skydive over Lake Taupo on on New Zealand's North Island, experienced an engine problem shortly after take-off.

However, all 13 were able to exit the plane and skydive to safety before the aircraft plunged into the Lake. All onboard the plane jumped out – six passengers and six crewmembers in tandem mode, one couple at a time, and then the pilot.

Despite jumping for their lives well below the recommended level for a tandem jump, the skydivers descended safely - some into water, others onto land - with no fatalities or injuries.

Clements also praised the pilot for his quick thinking, adding “he had to deal with the worst nightmare really for a pilot - what appears to be an engine failure"As a result he's told everyone to get out of the plane, and he's followed his own advice."

The engine failed at about 600 metres, with Clements adding “it's a lot lower than we would want to be; the minimum activation for a tandem parachute is 5,000 feet (1,500 metres)."

One witness told TVNZ One News she watched as the plane plummeted towards the water.

The witness stated "I saw the pink plane coming across and smoke coming out of it, then saw the plane [and] the parachutists jumping out of it," she said.

New Zealand's Civil Aviation Authority and Transport Accident Investigation Commission have both begun inquiries into the accident which happened on Wednesday 7th January.

The inquiry is expected to take 18 months, but the Commission said it had the ability to issue interim reports or safety recommendations before the completion of the inquiry if necessary.