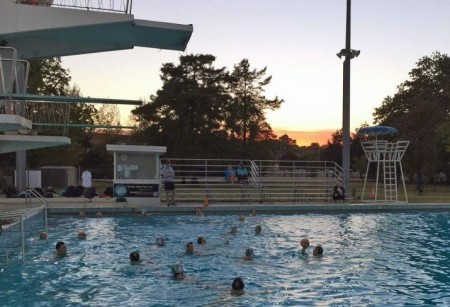 Engineers assessing costly water leakage at the ageing Canberra Olympic Pool are confident of being able to the stem the losses, although the solution is unlikely to be permanent one.

With the currently closed outdoor diving and toddler pools at the facility found to be leaking up to 46,000 litres of water a day earlier this year - equating to 19 million litres annually - the ACT Government has been assessing options handed to them by the engineers.

The outdoor pools have been closed since April for the winter break, and the network of pipes that connect the pools have been searched by specialists. The search for leaks also saw the closure of the indoor 50 metre pool at the facility at the end of April, although that has since reopened.

However, ACT Minister for Sport and Recreation Shane Rattenbury has conceded that the pools might not reopen if the leaks can't be fixed or their repair is deemed too expensive to the taxpayer.

With the Club Group having ended its management of the Canberra Olympic Pool and the Lakeside Leisure Centre in Tuggeranong by mutual agreement with the ACT Government, the YMCA NSW has been appointed as the interim operator at Canberra Olympic Pool from 1st July 2015 until 31st March 2016 while longer term options are resolved.

In appointing the YMCA NSW, Minister Rattenbury stated "the YMCA has extensive experience in managing a variety of aquatic and leisure facilities in Canberra and throughout NSW, and I am very pleased that they are able to step in under an interim agreement.

“This is a great outcome for the community. The YMCA’s appointment ensures a continuity of service for Canberrans using the Canberra Olympic Pool."

With the Lakeside Leisure Centre closed for a $500,000 eight-week refurbishment, including a full retiling of the pool and renovation of the existing change rooms, the Canberra Olympic Pool's opening hours have been temporarily extended from 5.30am to 8.30pm from Monday to Friday, and lane space will be increased using portable lane dividers."

The ACT Government is currently undertaking a new procurement process and expects to appoint a new operator at Lakeside Leisure Centre before it reopens.

Canberra Olympic Pool was built in 1955 during the build up to the 1956 Melbourne Olympic Games and won the Royal Australian Institute of Architects' Sulman Award for meritorious architecture in New South Wales in the recreation and sports class in that year.

An air supported dome was added to the facility in 1992 to allow the use of the 50 metre pool all year round. For the first couple of years the dome was erected in winter and dismantled in summer but when contract management of the facility began in 1996 it was decided to leave the dome erected all year round.

The dome was replaced in 2008 as part of a $2 million refurbishment project that included other minor upgrade works.

The facility offers a range of health and aquatic programs to cater to the interests and abilities of the Canberra Community. The centre is equipped to with a 50 metre indoor pool, four beach volley ball courts, coin operated barbeques, and a fitness club.