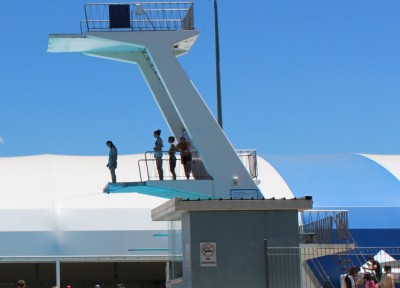 The Canberra Olympic Pool's diving and toddler pools are currently leaking an estimated 46,000 litres a day, with the ACT Government and facility managers uncertain over the reason.

Last Thursday (19th March), the ACT Government announced the extent of the leak to the pool, located in the suburb of Civic, which amounts to 19 million litres per year.

Commenting on the leakage, ACT Minister for Sport and Recreation Shane Rattenbury stated “(this is) the equivalent of a loss of the Olympic pool about every two weeks at its highest time.

"At this stage we cannot confirm that the outdoor pools in Civic will re-open next summer."

Minister Rattenbury estimated the ACT Government had spent upwards of $100,000 on water for the pool which has already been leaking for 18 months, with workers have been unable to locate the source of the leak.

However, a full-scale search will begin when the outdoor dive and toddler pools shut for the winter on 31st March.

It is not known exactly where the water is going, but Minister Rattenbury says at least some of it is going into stormwater and sewerage systems.

Opposition spokesman for sport and recreation Steve Doszpot said if the ACT Government could not provide certainty quickly, major users such as the Diving Academy, water rugby and water polo would need to find a new home.

Doszpot told the ABC, “we know that the Government was alerted to the leakages about 18 months ago. It seems to have taken a long time to address the problem.”.

Doszpot said he had asked Minister Rattenbury why the contractor who found the leak had their contract terminated two years early, but he was yet to receive an answer.

The outdoor pool hosts the only diving board in Canberra, and the diving community will bear the brunt of any closures.

The diving pool is currently open for only five months a year, and it is feared that permanent closure will be detrimental to the Canberra diving community.

ACT Diving Academy President Ross Burden said the pool was essential to the Canberra diving community, stating “this is an iconic pool, it's an Olympic pool, it's a terrific pool."

If the pool was to close permanently, Burden said the ACT diving community would face having to travel to use the other nearest diving pools being in Orange, Wagga Wagga or Sydney.