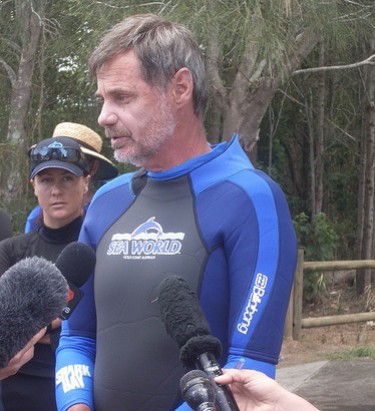 The Australasian Regional Association of Zoological Parks and Aquaria (ARAZPA) has bestowed its Award for Professional Excellence on Sea World’s Director of Marine Sciences, Trevor Long, at its annual ARAZPA conference held at Sea World Resort.

Trevor was awarded for his outstanding commitment to marine conservation and involvement in numerous marine animal rescues including freeing whales entangled in shark nets.

The ARAZPA Awards were created six years ago to encourage member zoos and aquaria to attain higher achievements for wildlife on behalf of the community. The peer awards recognise those who have excelled in their conservation endeavours throughout the year.

Trevor said that he was surprised and delighted at being chosen for the award, stating "working with the animals and making a difference through our research and rescue activities is rewarding in itself, so to be recognized by the industry for doing such wonderful work is humbling.

“Our Sea World Research and Rescue Foundation have undertaken many many rescues over the years, and it’s something I'm extremely proud of.

“I feel really fortunate to have been involved in making a difference through conservation, and helping to establish higher values for animals through this work.”

Long said that his fondest rescue memory is from a whale rescue at Coolum Beach in 1992 where a Humpback Whale had beached itself about 20 metres from the water, recalling “I remember flying over in the helicopter and just thinking, God how are we going to do this.”

Sea World eventually designed a harness and towed the whale off the beach, taking almost 36 hours. Long said that by the time the whale was towed out to sea there were approximately 5,000 people on the beach - including volunteers, police, government and council staff as well as staff from Under Water World.

Long added “I remember the moment the whale started to swim; the whole beach just erupted with three cheers for Sea World. It was the first time a rescue of that nature had ever been done anywhere in the world. It was a wonderful moment, and looking back it was great to see how many people were inspired by that rescue.”

Trevor Long commenced working at Sea World in 1973 and was involved in the collection of many of Sea World’s animals.

Today, as Director of Marine Sciences, he leads the divers, aquarists, life support, education, curatorial unit, Polar bear and marine mammal staff in fostering care for marine animals at Sea World. Trevor is also a Master Mariner and Skipper of Sea World One.

Long is responsible for the collaborative design of all new exhibits and all processes of procurement of animals from initial fact finding to delivery, with Shark Bay being the latest world class exhibit to be developed.

Long is a Member of the Board of Trustees, and Administrator of the Sea World Research and Rescue Foundation, a non-profit organisation which funds scientific research projects on marine vertebrate biology contributing knowledge needed for the ongoing protection and preservation of the marine environment and its inhabitants.

Long heads up the Sea World rescue team which collaborates with the Queensland Parks and Wildlife Service and Queensland Boating and Fisheries Patrol, in the rescue of stranded and entrapped marine animals. Sea World has been called upon numerous times by Queensland, interstate and overseas governments to assist with marine animal strandings.