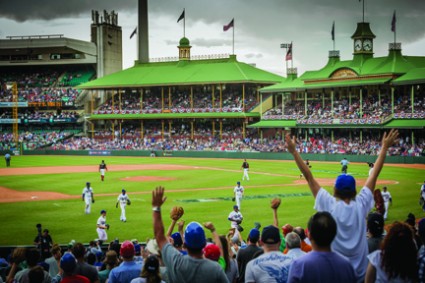 Sell out crowds of over 40,000 for each night of the Major League Baseball (MLB) Opening Series between the Arizona Diamondbacks and the Los Angeles Dodgers at the Sydney Cricket Ground over the weekend have marked the event as a massive success.

Preceded by the Team Australia Challenge on Thursday and Friday (20th and 21st March), the famous cricket ground passed its test as a baseball field with flying colours. Over 100,000 people attended the four-days, which attracted a global viewing audience of over 140 million people.

Having first hosted US baseball teams in 1888, the SCG lasted staged baseball during the 2000 Olympics. However, the success of the weekend means that event is unlikely to be a one-off, with MLB Senior Vice-President for International Operations Paul Archey telling the Sydney Morning Herald "we don't see this as a one-time thing. We'd love to come back (as) we don't want to just play in the baseball hotbeds of Japan or Taiwan, Korea or Latin America – we want to play in developing baseball markets and hopefully give the sport a boost to grow."

NSW Minister for Sport and Recreation Gabrielle Upton heaped massive praise on the event, suggesting "these matches have created the biggest sporting buzz in Sydney since we hosted the Olympics 14 years ago.

"I can safely say bringing the Major League Baseball to Sydney has been an extremely good investment.

"There have been many major sporting events in Sydney since the 2000 Olympics, including the 2003 Rugby World Cup, FIFA World Cup qualifiers and the Australian Open of Surfing.

"But personally I think it is hard to beat the MLB in terms of a world-class entertainment experience, global television audience and positive international exposure for Sydney, particularly in the US market. 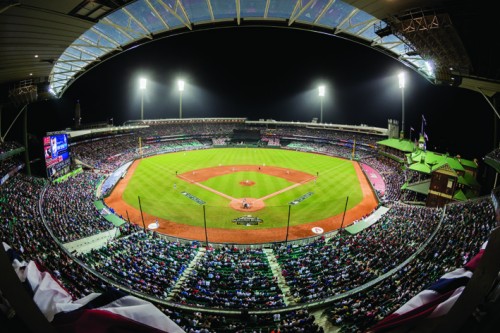 Minister Upton said Australian sports and venues, including the Sydney Cricket Ground have already adopted many of the fan engagement strategies from the MLB playbook.

She added "anyone who went to the Ashes or a Twenty20 match this summer knows the SCG runs a terrific, entertaining event, but this weekend they have taken it to the next level.

"I take my hat off to the SCG Trust, (Chief Executive) Jamie Barkley and the entire SCG staff including Curator Tom Parker. Converting the SCG from a cricket ground to a ballpark has been no mean feat, and I know there has been a lot of blood, sweat and tears behind the scenes to make it happen.

"The SCG has been committed to working closely with the MLB, Moore Sports and the Minister for Tourism, Major Events and the Arts George Souris, and tonight's event has been a testament to their hard work.

"Apart from the $13 million in direct visitor spend, having the superstars of the MLB in action at the SCG is sure to inspire the next generation of junior baseball players."

Transformation of the SCG playing surface included the installation of a specially quarantined in-field clay imported from the USA under the supervision of Curator Parker.

In addition, The Fitness Generation supplied TRUE cardio and Schwinn spin bikes for the MLB stars to train on as they prepared for their games.

For more information go to www.sydneycricketground.com.au/latest-news/scg-ready-to-play-ball/