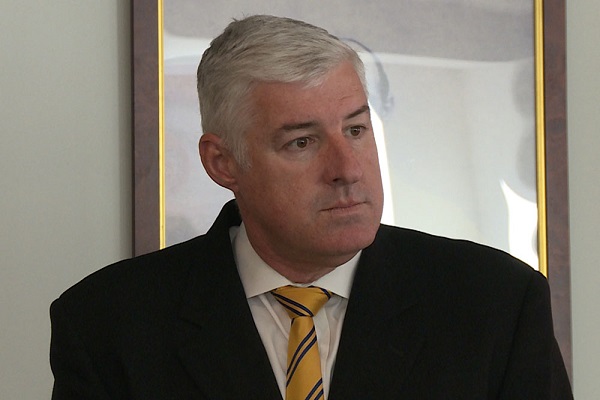 Rugby Australia Chairman, Cameron Clyne says the game has suffered reputational damage from the Israel Folau affair, but that had the sport not axed the player for his controversial social media posts it would have been worse.

Clyne, who has been criticised for being silent through the ongoing saga following Folau’s social media posts, spoke to the ABC's The Ticket from World Rugby’s headquarters in the Irish city of Dublin.

Acknowledging that the incident has damaged the game, Clyne denied players' religious beliefs are being silenced, advising “yes, the game has suffered reputationally through this, but had we not dealt with this in a clear and decisive way the game would have suffered way more, there is no question of that.

"We would have suffered tremendous backlash from a lot of people."

A code of conduct tribunal found Folau guilty of a high-level breach after social media posts saying ‘sinners’ - including homosexuals - would go to hell unless they repented.

With his contract terminated, Folau decided against appealing against the decision through the tribunal but says he was taking legal advice on whether to take Rugby Australia to Court.

When asked to describe the impact the saga has had on the game in Australia, Clyne advised "it's still too difficult to tell", adding “I think one of the pleasing things is the reaction we've had from other sports in Australia and overseas … they've all recognised it's been a very difficult issue but they've all been incredibly supportive because they understand the sorts of challenges we've been grappling with."

Responding to critics who have suggested Folau’s career-ending penalty is over-reach, Clyne stated “if they can point out an organisation where posting this would be acceptable we'd be interested to hear (from them) and also a sponsor that'd be happy to be associated with that.

When asked to determine how much of the decision to terminate the playing contract was commercial, and how much of it was moral, Clyne told the ABC "the game doesn't exist without sponsors.

"The overwhelming response we hear around the world is that organisations want to be involved with sports that are inclusive … I think you have to take a stand."

With reports that some players of Pasifika heritage, and others who share strong religious beliefs inside the Wallabies playing group, feel that they are being silenced, Clyna advised "I don't really want to comment on what's going on inside the Wallaby camp … but we've made it very clear to the players they are not being silenced, they are absolutely free to express their views on their faith and other matters, but the threshold is those views, or views on any matter, cannot cause offense.”

Rugby Australia's Chief Executive, Raelene Castle, suggested she had heard from many, "even hundreds" of concerned people, including parents of children struggling with their sexuality, who took offense from Folau's recent posts.

The Australian Christian Lobby has started a petition of support for Folau, claiming his religious freedom is under threat. By Friday afternoon it had almost 48,000 signatures.

Clyne was asked how many supporters he had heard from who believed Folau should still be able to play the game.

In response he concluded “I don't have those stats. I mean, I would say I also received hundreds of comments from people who'd indicated they received harm, but I go back to this point, I understand that people may feel the player has been dealt with harshly.

"I take a lot of notice of people and athletes who've come out, and others who've come out publicly, and spoken about the fact that they have experienced real harm from this.

"And I've not had any company come to me and indicate they have an employment contract that would actually have allowed this to occur, nor has any sponsor come to me to say they would be happy to be associated with a game that would permit these comments.

"So, I do accept that some people are not happy that this is the case but … in almost every company in Australia he would have been dealt with in the same way."